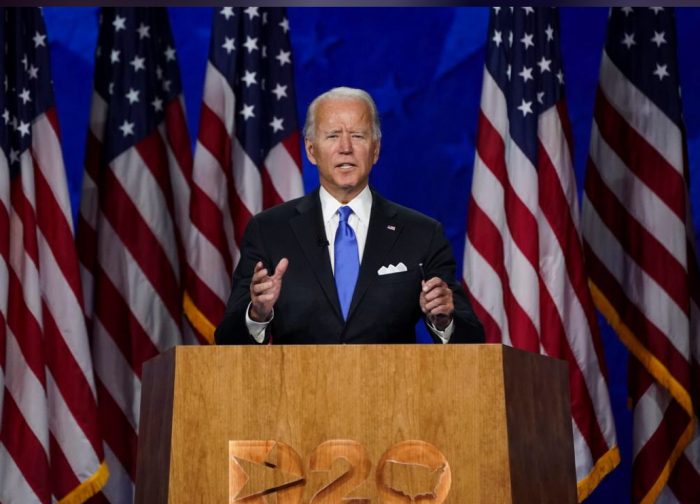 Joe Biden: another support boost from US senior military and national security officials


Former U.S. Vice President Joe Biden set the tone for his general election battle with Donald Trump on Thursday night by vowing to draw on the best the country has to offer and lead it out of its present “season of darkness”.

He spoke in Delaware as he formally accepted the Democratic presidential nomination at the first virtual convention, forced by the raging COVID-19 pandemic.

He vowed to heal a country battered by a deadly pandemic and an economic catastrophe by uniting all Americans, while warning that President Donald Trump would go on stoking hatred and fear if elected to another four-year term.

“Here and now, I give you my word: if you entrust me with the presidency, I’ll draw on the best of us, not the worst,” Biden said as he accepted the Democratic presidential nomination for an election 75 days away.

“I’ll be an ally of the light, not the darkness.”

The speech – the capstone of a nearly five-decade political career – was delivered inside an empty arena in his hometown of Wilmington, Delaware, at the conclusion of the four-day Democratic National Convention, which was held virtually because of the coronavirus pandemic.

The former U.S. senator and vice president described the current moment as one of historical import, amid a health crisis over the coronavirus, a recession, a national reckoning on race and a battle over the environment.

He promised to represent all Americans and to work “just as hard” for those who do not support him, drawing an implicit contrast with the Republican Trump, who has shown little inclination to appeal beyond his base of voters.

Biden also offered a withering assessment of his opponent’s response to the pandemic.

“Our current president has failed in his most basic duty to the nation: he has failed to protect us,” Biden said.

Another former rival, billionaire and former Republican Michael Bloomberg, said Trump had failed both as a businessman and as a president.

“And let me tell you a little secret. Donald Trump’s economic plan was to give a huge tax cut to guys like me, who didn’t need it. And then lie about it to everyone else,” he said.

As they have throughout the week, Democrats emphasized the importance of voting amid the pandemic and warned against efforts to suppress the vote. Trump’s repeated, unsubstantiated claims that mail-in ballots are rife with fraud, coupled with cuts to the U.S. Postal Service, have fueled fears that some voters may be disenfranchised.