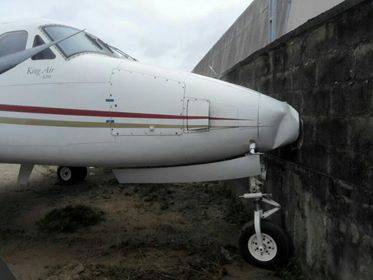 A Jet in the fleet of Jedidiah Air has crashed into a fence at the General Aviation Terminal (GAT), local wing of the Murtala Muhammed Airport, Lagos, Southwest Nigeria.

It was gathered that the aircraft, King Air 200 Jet was re-parking when it rammed into the fence at the tarmac close to a facility used by Bristow Helicopters.

The King Air 200 jet with registration number 5N-HIS is being operated by Mobil Oil Nigeria-Wings Aviation.

The accident reportedly occurred due to brake failure, which caused significant damage to the aircraft.

Accident Investigation Bureau (AIB), spokesperson, Tunji Oketumbi said a team of investigators had been dispatched to the scene of the accident.

“We have been notified of an accident that occurred at the local airport and our investigators have gone there to commence investigations,” he said.

Oketumbi said the team would submit their preliminary report to ascertain the cause of the accident.

The Nation quoted an eye witness as saying that the accident occurred about 10.00 am at the tarmac near Bristow Helicopter facility.

“The accident happened around 10:00am at a tarmac beside Bristow Helicopter Hanger 3. The jet had no passenger on board with the pilot suffering no injury.

“The brake of the jet was not functioning which led to the collision of the jet with the fence of Bristow Helicopter hanger,” the eyewitness said.