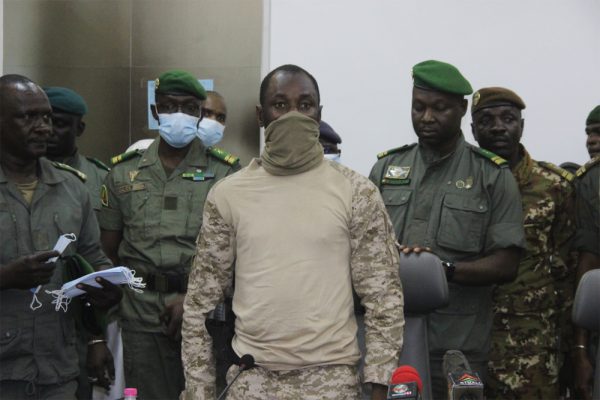 Until Wednesday, when he announced himself as the head of the National Committee for the Salvation of the People, he was little known to the general public.

He commanded the autonomous battalion of special forces and what in Mali is known as the Hardening Centres.

From 2012 to the present day, he participated in several operations in Mali’s regions of the North, Mopti and Ségou.

He was a product of the Malian military schools and son of an army officer.

According to L’ESSOR, Goita was interested from his childhood in the military.

He first joined the military Prytanee of Kati (1992-1998) and continued his training at the Koulikoro Combined Military School (EMIA), which produces the cream of the Malian army.

The young Goïta opted for the specialty “Armored weapons and cavalry” and was assigned, upon leaving the EMIA, to the 134th Reconnaissance Squadron in Gao in 2002, where he served for three years.

In 2005, Assimi Goïta joined the 123rd Reconnaissance Squadron in Kidal.

He was in the command until 2008 when he was appointed commander of Tactical Group, as part of the fight against armed terrorist groups and drug traffickers.

As a career soldier, he had traveled almost all the regions of the North of Mali: Gao, Kidal, Ménaka, Tessalit and Timbuktu.

In 2014, he decided to volunteer to serve in the special forces.

But the same year, he was sent for higher military education.

Thereafter, he was appointed chief of general staff of the armed forces, later as a staff officer at the combined arms operational centre; then as head of the operations division of the army staff.

Following the terrorist attack on the Radisson Blu hotel, he was seconded as coordinator of special operations of the Ministry of Defence to that of Security.

A man of action, the senior officer returned to the field to command, from 2016 to 2017, the operational unit of the Autonomous Battalion of Special Forces deployed in Sofara (Mopti region). Then, in 2018, he became the boss of this Battalion and of the Hardening Centers.

Colonel Assimi Goïta had gone on training courses in France, Germany, Egypt and the United States as part of special forces training.

He is married and has three children.