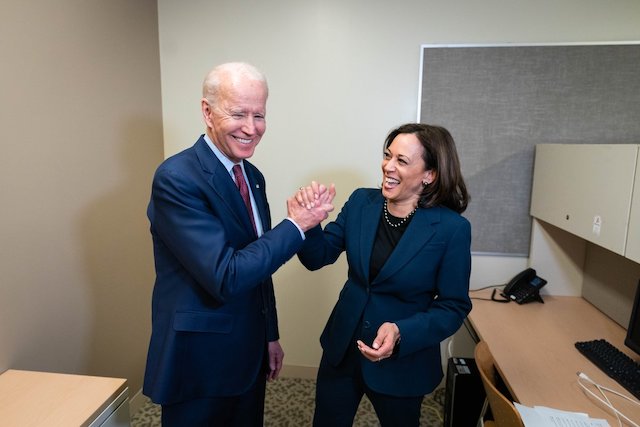 Joe Biden with Kamala Harris to be sworn-in 20 January

A day after U.S. Democrat Joe Biden formally accepted his nomination as presidential candidate, over 70 former Republican national security officials including ex-CIA and FBI chiefs will give his campaign a major boost.

They will today endorse Biden, while launching a scathing indictment of President Donald Trump, calling him corrupt, a liar, malignant narcissist and unfit to serve.

The group, called Former Republican National Security Officials for Biden, includes some of the most senior Republican members of the U.S. defense and intelligence establishment to have served in the administrations of Ronald Reagan, George H.W. Bush, George W. Bush and Trump.

The 73-strong group includes retired General Michael Hayden, who served as national security director and head of the CIA; William Webster, the only man to serve as both head of the CIA and FBI; John Negroponte, the first director of National Intelligence; Michael Leiter, former director of the National Counterterrorism Center; and Mike Donley, former Air Force secretary.

Their full-throated condemnation of Trump and backing of Biden will come three days before Trump’s nominating convention opens on Monday and underscores how the Republican president has alienated some members of his own party, especially among intelligence and foreign policy veterans.

“Trump has demonstrated that he lacks the character and competence to lead this nation and has engaged in corrupt behavior that renders him unfit to serve as president,” the group plans to declare in a full-page ad in The Wall Street Journal on Friday.

“We have concluded that Donald Trump has failed our country and that Vice President Joe Biden should be elected the next President of the United States,” it adds.

The group is one of a number of Republican organizations opposing Trump’s re-election in the Nov. 3 election.

Collectively, they object to his alienation of U.S. allies abroad and his leadership at home, most recently his response to the coronavirus pandemic, which has killed more than 170,000 Americans and triggered a severe economic downturn, as well as his reaction to nationwide protests over racial injustice and police brutality against Black Americans.

The Trump campaign has described Republican-led groups campaigning for Biden, such as Republican Voters Against Trump and 43 Alumni for Biden – hundreds of officials who worked for George W. Bush – as “the swamp,” disaffected former officials “trying to take down the duly elected President of the United States.”

Trump himself has expressed contempt, saying on Twitter last year that such “Never Trump Republicans” are “human scum.”

Bob Tuttle, who was director of personnel under Reagan and ambassador to the UK under George W. Bush, is a member of the national security group and said Trump’s handling of the coronavirus crisis had been “abominable.”

“He’s a malignant narcissist. He’s a liar. He’s a despicable human being and the worst president in American history – it’s not even close,” Tuttle told Reuters.

“Lack of leadership has led to the deaths of 170,000 Americans,” Glassman said. “There’s no excuse in the country with the best health scientists in the world.”

The group lays out a detailed charge sheet against Trump, including accusations that he is unfit to lead in a national crisis, undermined confidence in U.S. elections, aligned himself with dictators, preached a “dark and pessimistic view of America” and attacked and vilified immigrants.

The national security group will launch a website on Friday and come under the umbrella of another anti-Trump organisation run by Republicans, Defending Democracy Together.

The former national security officials raised $140,000 among themselves to launch their effort.