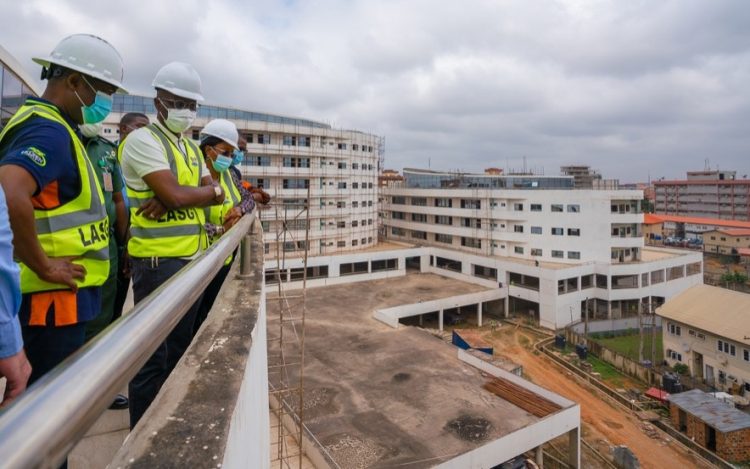 Governor Babajide Sanwo-Olu of Lagos State on Friday expressed its determination to reduce the cost of governance and promote inter-communication among agencies through provision of sustainable office infrastructure for its workforce.

Governor Babajide Sanwo-Olu of Lagos State on Friday expressed his determination to reduce the cost of governance and promote inter-communication among agencies through provision of sustainable office infrastructure for its workforce.

Lagos State Governor, Sanwo-Olu gave the assurance on Friday during an unscheduled visit to two iconic structures in the State – the Lagos Revenue House and Multi Agency Building in Alausa, Ikeja.

The Governor visited the Lagos Revenue House (formerly Elephant House) building consisting of four wings of seven floors plus a wing of eight floors and a Multi-Storey structure consisting of three blocks on a total area of site of 2.01 hectares dubbed the Multi Agency Building.

Sanwo-Olu was accompanied on the visit by his deputy, Dr. Obafemi Hamzat; Head of Service, Mr. Hakeem Muri-Okunola; Special Adviser to the Governor on Works and Infrastructure, Engr. Aramide Oduyoye and Commissioner for Budget, Mr. Samuel Egube, among other top government officials.

The visitation is in line with the Sanwo-Olu’s government determination to ensure prompt completion of the projects conceived by Lagos State Government out of the twin desire to scale down the incidental costs of premises rentals and accommodate most parastatals of the state within the vicinity of the State’s secretariat.

Speaking during the visitation to the Lagos Revenue House at Alausa in Ikeja, Sanwo-Olu observed the need to accommodate the phased delivery of project so as to meet the delivery of wings A and C by December 2020.

The Lagos Revenue House, located at the Central Business District, Ikeja is in close proximity to the State Secretariat at Alausa, Ikeja and when completed, it is proposed to accommodate all government agencies involved with revenue generations in the state.

The Project comprises four wings – A, B, C and D, with three of the wings consisting of seven floors and D with eight floors. Some of the facilities provided in the building are borehole water, storage tank, water treatment plant, central sewage treatment plants and pumping machines.

The contractor handling the project, Messrs, Intergrated Projects Limited promised the delivery of the project as scheduled.

The Multi Agency Building comprised two blocks (A and C) of five floors and one Block B of eight floors with Pent-House on each of the last floors for Conference and meeting spaces.

The ground and first floors are designed to accommodate car parks while the second to seventh floors is designed as Office accommodation.

Others features included in the project are: two elevators per block, canteen and kitchens for each block, conveniences, central air conditioning systems and tamp concrete finishes for the carport, among others.

Sanwo-Olu urged the contractor handing the project, Messrs Palmyra Construction Nigeria Limited, to accelerate delivery of the project so as to avoid Cost Overrun works to enable an early completion of the project.