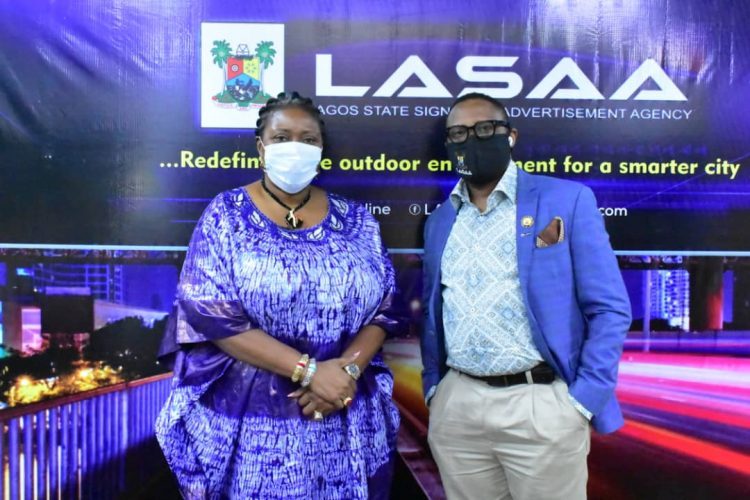 The Lagos State Real Estate Regulatory Authority (LASRERA) has solicited for a seamless working relationship with the Lagos State Signage and Advertisement Agency, LASAA and the State Criminal Investigation Department, CID, Panti, Yaba in its drive to achieve its mandates of regulating, registering, monitoring and achieving sanity in the Real Estate Sector.

The Special Adviser to the Governor on Housing, Mrs Toke Benson-Awoyinka, who paid a courtesy call to the offices of the two organisations on Wednesday said the intention of the visitation and request for collaboration was to convince members of the public that the Agency has the support of all relevant stakeholders that would make the attainment of the vision of LASRERA achievable.

She informed that the Agency’s collaboration with LASAA would assist in curbing the placement of unverified and misleading advertisements by Real Estate Practitioners and Property Developers across the State since all advertisements in the State are approved by LASAA.

Benson-Awoyinka stated that it became necessary to collaborate with the State C.I.D so as to curb the menace of the fraudulent practices of unauthorized persons in the sector and to sanitise the entire real estate industry, stressing that due process of prosecution would be followed in dealing with a recalcitrant practitioner.

She restated the commitment of Governor Babajide Sanwo-Olu to protect the rights of all residents of the State both at home and abroad who are either seeking to rent, buy or sell properties in the State.

The Special Adviser said that real estate transaction is an important economy activities to the State as oil is to the country, adding that the collaboration will transform and reduce rate of fraudulent practices once people are aware that they can be prosecuted by the Law of the State.

Deputy Commissioner of Police, SCID, Mrs Yetunde Longe stressed the need for separate court to handle the issues and matters on fraud in the State because of the volume of work load on Magistrate Courts across the State.

She said that people visited the CID, Yaba to complainants on different issues, including fraudulent activities which often take a long time to conclude investigation but that with collaboration with the Agency and assigned Court, it will be easy to prosecute any acts of fraudulent practices in the State.

The Chairman, Yaba Local Government Development Area, Kayode Omiyale pledged the support of its Local Government Council to provide an office space for the Agency’s Zonal Office, in order to ease registration for Real Estate Practitioners/ Property Developers within the Area.

On his part, the Managing Director, Lagos State Signage & Advertisement Agency (LASAA), Mr Adedamola Doceme assured the Agency that LASAA would support LASRERA by asking for the Agency’s registration before granting approval for placement of advertisement for any of the Agency’s stakeholders.