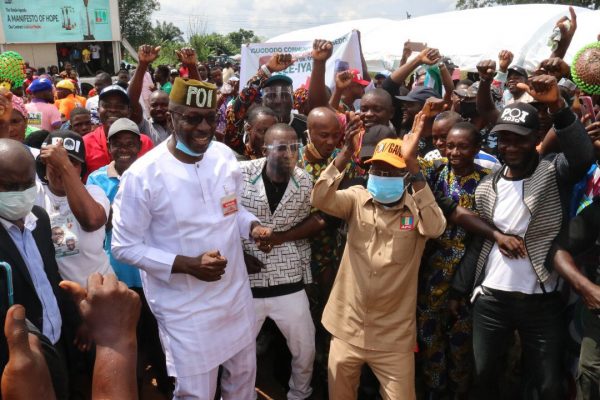 Mr Osagie Ize-Iyamu, the APC candidate for the Sept. 19 governorship election in Edo, said it is the turn of Orhiomwon Local Government Council to produce the next governor of the state.

The All Progressives Congress candidate made the assertion on Saturday during his electioneering at Iyoba Ward 4 and Ugboko Ward 5 of the local government area.

Ize-Iyamu, who hails from Orhionmwon local government area, said: “God has given us the nomination; it’s just for you to vote for APC on Sept. 19.

“We are looking for 100 percent votes from these wards; we want to win the 12 wards in Orhionmwon.

“One of the first things I want to provide in this council is electricity because power supply promotes development.

“I will also ensure that the Benin-Abraka Road that transverses this council will also be reconstructed,” he said.

Also speaking, Adams Oshiomole, former APC National Chairman, said that Ize-Iyamu had the agenda that summarised the problems of Edo as well as proffer solutions to the problems.

“If you vote for your son, he will build standard roads in this community.

“You have a duty to bring a man who is God-fearing to take over the affairs of the state come Nov.11, 2020.

“He will bring back Edo to the part of development,” Oshiomole said.