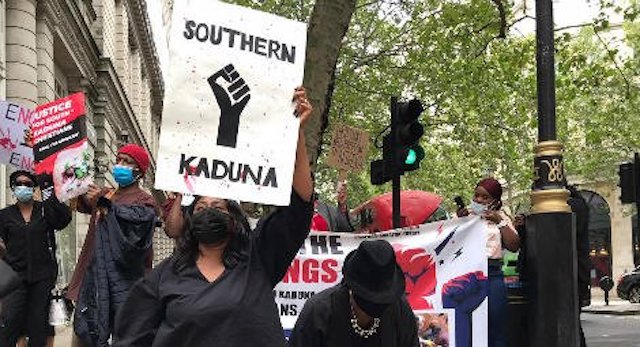 Some Nigerians protest in London over killings in Southern Kaduna

Some members of the Nigerian diaspora demonstrated Friday outside the Nigerian High Commission in London and will hand in a letter protesting the relentless attacks on communities in southern Kaduna by armed men of Fulani ethnicity.

Protestors gathered under the umbrella of the Southern Kaduna Peoples Diaspora (SOKAPDA) and carried banners stating, amongst other things: “Stop the Killings,” “Enough is Enough,” and “Justice for South Kaduna Christians”, while chanting: “It’s not a conflict, it’s a genocide,” “Our lives matter,” and “Southern Kaduna can’t breathe.”

Decrying the incessant loss of life this year, the protestors called on Nigerian President Muhammadu Buhari to declare the militia a terrorist organisation and accused the international media of “a conspiracy of silence” regarding the deadly violence.

The protestors, who will also be delivering letters of protest to the UK Parliament and Prime Minister in Downing Street, criticised a recent television interview by Kaduna State Governor Nasir el Rufai in which he effectively held the people of southern Kaduna responsible for the spate of killings.

El-Rufai was quoted to have said: “they organise these killings and then, their leaders are invited by the governor, they wine and dine and they are given brown envelopes.”

He also accused community leaders of raising “a spectre of genocide […] so they can get donations and money into their bank accounts from abroad,” adding that his administration was amassing sufficient evidence to arrest them.

The interview, which has been widely condemned, occasioned a petition calling on the Nigerian Bar Association (NBA) to disinvite the governor as a keynote speaker for its 60th Annual Conference, which begins on 26 August, and inspired the Twitter hashtag #CancelElRufai2020.

In a statement issued on 17 August, the President of the Christian Association of Nigeria (CAN), Rev. Samson O. A. Ayokunle, urged Governor el Rufai to “end the cycle of accusations and counter-accusations between the government and other stakeholders over the killings in Southern Kaduna”.

He also urged him to embrace a “round table” approach, adding that “every provocative statement over the matter should be avoided.

“Everybody is looking at the governor as a father of the state and this is the understanding with which he should handle every accusing finger pointed at him.”

Meanwhile, attacks on communities in southern Kaduna continue to occur, despite 24-hour lockdowns in four Local Government Authorities (LGAs) and the decision by the Defence Headquarters to deploy special forces to southern Kaduna to address the violence.

CSW’s Chief Executive Mervyn Thomas said: “CSW stands with the people of Southern Kaduna, both in the state and the diaspora, who are demanding an end to the relentless violence. Communities are deeply traumatised, and many are grieving the loss of loved ones, homes and livelihoods.

“We therefore urge Governor El Rufai to use his office and influence to seek solutions to the crisis and to avoid amplifying accusations which have no bearing on reality, and which merely exacerbate the situation by causing further distress. Both federal and state governments must reach out to all stakeholders in an even-handed manner in order to find a lasting solution to the violence.

“Instead of targeting victim communities, the authorities must focus on intercepting and disarming the non-state actors who are terrorising civilians, and on ensuring justice for those affected.”

In a statement issued on 19 August, the Southern Kaduna Peoples Union (SOKAPU) revealed that the inhabitants of 109 communities in four LGAs Southern Kaduna have been displaced by militia men, who are currently occupying these areas.

The statement also highlighted that around 50,000 Internally Displaced Persons (IDPs) have sought refuge in camps across Southern Kaduna or have moved in with family members because their villages are either unsafe or have been taken over entirely.

As a response to a claim by Kaduna State Governor Nasir el Rufai that no area in southern Kaduna had been totally occupied, the statement listed the occupied villages, some of which have been held since 2019.

“It is our hope that with this information, government will begin the recovery of these rural communities back to the owners and the invaders [will be] apprehended and taken to justice.”

Recent attacks were also detailed in the SOKAPU statement.

The killers were eventually chased away. Although Nigeria troops arrived after the killers had escaped, SOKAPU commended “their prompt response” and called on its members to “give maximum cooperation to all the forces deployed to safeguard southern Kaduna.”

On 17 August Mr Bulus Joseph, a 48-year-old father of nine was “murdered gruesomely” on his farm in Sabon Gida Idon, along the Kaduna-Kachia road, in Kajuru LGA, by Fulani militia. He had stood up to his killers, enabling his wife and three children who were on the farm with him to escape.

On the 16 August, Reverend Adalchi Usman of the Evangelical Church Winning All (ECWA) Unguwan /Madaki, Maro Ward, in Kajuru LGA, a 39-year-old father of two, was killed when a commercial vehicle in which he was riding was ambushed by armed assailants.

Mariah Na’Allah from Anchuna village in Zangon Kataf LGA and Ezekiel Maikasa from Gadanaji in Kajuru LGA also lost their lives in the attack. Danlami Dariya, the driver of the vehicle, was abducted and his whereabouts remains unknown.