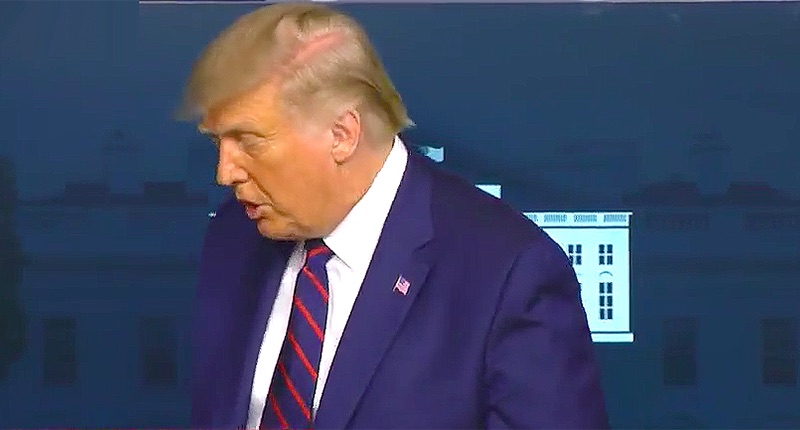 US President Donald Trump: planning an escape to Scotland?

U.S. President Donald Trump’s good news that he promised at his short news briefing was the rushed authorisation by the FDA of the use of convalescent plasma to treat COVID-19 patients.

According to reports, the FDA a few days ago withheld approval for the use of the therapy, as America’s COVID-19 deaths soared to 180,000 and infections 5.8 million.

But after Trump accused the FDA of being part of the ‘Deep State’, opposed to him, the FDA caved him.

Using semantics, the FDA now said it has authorised the use of the plasma, blood taken from recovered COVID-19 patients and that authorisation is different from approval.

The announcement from the FDA of a so-called “emergency use authorization” also comes on the eve of the Republican National Convention, where Trump will be nominated to lead his party for four more years.

A day before the FDA’s announcement, Trump tagged the agency’s Commissioner Stephen Hahn in a tweet and said, “The deep state, or whoever, over at the FDA is making it very difficult for drug companies to get people in order to test the vaccines and therapeutics.” “Obviously, they are hoping to delay the answer until after November 3rd. Must focus on speed, and saving lives!”

The plasma authorisation formed the kernel of his short news briefing on Sunday.

The conference ended abruptly, when journalists even from the conservative media asked if Trump was not pressuring FDA to authorise the plasma.

Trump refused to answer the question.

But FDA Commissioner Dr. Stephen Hahn, a Trump appointee, clarified that it was not an approval as Trump painted, but an authorisation.

Hahn said the reports are still coming in on the research, but Trump said he fast-tracked what he called the “bureaucracy.

“Under our legal authority — this is not the same as an approval, but it’s an authorization,” said Hahn.

“It allows us to expand the access to this. We knew that for all of our emergency use authorizations. Remdesivir, which was authorized on May 1st, we’re still collecting data, and we will continue to do that with plasma as well. It’s the nuances of the language.”

Dr. Hahn also refused to answer CNN’s Jim Acosta asking if pressure was put on the FDA to approve it, whether it was ready or could be confirmed to work or not.

The FDA, which appeared to rush with an announcement on Sunday, said early evidence suggests blood plasma can decrease mortality and improve the health of patients when administered in the first three days of their hospitalization.

It was not immediately clear what the immediate impact of this decision would be.

“It appeared that the product is safe and we’re comfortable with that and we continue to see no concerning safety signals,” said Peter Marks, director of the Food and Drug Administration’s Center for Biologics Evaluation and Research said on a conference call with reporters.

The agency also said it determined this was a safe approach in an analysis of 20,000 patients who received this treatment. So far, 70,000 patients have been treated using blood plasma, the FDA said.

Dr. Sanjay Gupta, a health correspondent for CNN was one of the early commenters of the FDA authorisation.

He said in an interview on the news platform: “I don’t think this is a huge breakthrough in the sense that as Dr. Hahn mentioned, this convalescent plasma has been available and used under the expanded access programs, so this is a therapy out there and correctly as mentioned has been used to treat every infectious disease.

“The confusing part is, as you know, a couple of days ago the FDA put the brakes on an emergency use authorization, looking at the same data that came out of the Mayo Clinic and there weren’t a lot of randomized trials, right? You put some people in a group, and they get the medication, another group of similar people don’t get the medication and compare them. If you don’t randomize control, you don’t know.”