Asisat Oshoala crashes out with Barcelona women in Champions League 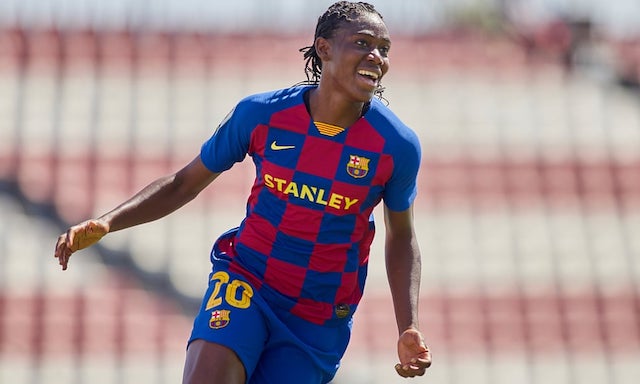 It is surely a terrible year for Barcelona, as their women were eliminated Tuesday by Wolfsburg from the UEFA Women’s Champions League.

A solitary strike from Fridolina Rolfo, during the match at the Anoeta Stadium in San Sebastian. sent the German outfit through to the finals.

And Nigeria’s Asisat Oshoala and her Spanish side were made to pay dearly for their poor clinical finish.

Barcelona Femini went into the semi-final on the back of a 1-0 win over Spanish rivals Atletico Madrid in a quarter-final knockout contest at San Mames Stadium in Bilbao last Friday.

Though they had more possession on Tuesday, they were unable to hit the net, while two-time former winners Wolfsburg went through. It was their fifth final.

Barcelona were runners up last year.

They wasted a number of chances through Oshoala and Caroline Graham Hansen as they fell agonisingly short of returning to the final.

The Nigerian was set up in the eighth minute by Mariona Caldentey to score the opener, but her effort went wide.

Six minutes later, she had her attempt blocked by the Wolfsburg defence before another glorious chance slipped away after she was played through by Caroline Graham Hansen in the 37th minute.

After the break, Rolfo profited from Svenja Huth’s botched overhead effort to lash in the winner in the 58th minute.

The four-time African Women’s Player of the Year was in action for 65 minutes before being replaced by Aitana Bonmati.

The result means Wolfsburg have maintained their one hundred-percent record over Barcelona, and they advance to face the winner of Wednesday’s semi-final between holders Lyon and French rivals Paris Saint Germain.

“It feels amazing, we’re really happy with the result and to have made it to the final. We were talking at half-time about the need to keep calm, keep the ball, not get too stressed and try to score a goal,” Rolfo, the scorer of the winner told BT Sport.

“It says a lot about the club that everybody wants to win and has a strong winning mentality, even if we didn’t play our best today.”

And despite losing, Barcelona coach Lluís Cortés said defiantly: “We are not at the level of Europe’s big teams, we are above it.”