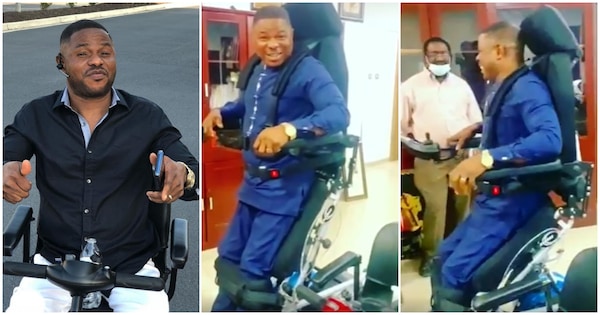 Popular Nigerian gospel artiste Yinka Ayefele stood on his feet again on Friday years after getting involved in a life-threatening accident.

The singer shared the moment of joy with his over 400,000 followers on Instagram.

In the video posted, he was beaming with smiles as he stood up with the help of a highly-sophisticated machine.

While strapped to the machine, Yinka Ayefele expressed his gratitude to his friend who got him the highly-sophisticated equipment.

He noted that he felt relieved of his pain.

He said: “I feel so relieved of my pain. Hon Oludare Akande bought this for me.
You will never experience pain in your entire life. Thanks so much.
You raise my hope of walking again. I believe!!!.”

The musician added that he is now ready to stand up while performing at his upcoming events.

Watch the moment of joy below:

Yinka Ayefele began his music career in 1997 after he was involved in an automobile accident.

The accident damaged his spinal cord and confined him to a wheelchair.

He, however, took a decision that changed his life positively – Instead of begging for money for treatment, he chanelled his energy into his God-given talent.

Yinka Ayefele has now received over 200 awards. Among the awards are: Member of the Order of the Niger awarded by Goodluck Ebele Jonathan, the president of the Federal Republic of Nigeria (2011) and Ekiti cultural ambassador award.