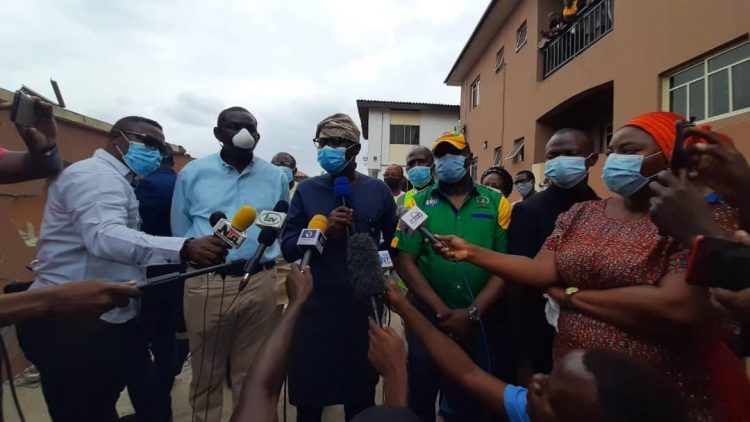 Sanwo-Olu at the scene of the crash

He was taken round the scene by the Director General, Lagos State Emergency Management Agency, LASEMA, Dr. Femi Oke-Osanyintolu.

Governor @jidesanwoolu commiserated with the victims of the crash and met specifically with Elderly Women and others staying in the neighborhood, he thanked God for their lives and assured them that Govt will take care of their losses. pic.twitter.com/7GU2LIPoRe

Sanwo-Olu commiserated with families of victims of the crash and also those whose properties were affected, as well as others staying in the neigbourhood.

He thanked God for saving their lives and assured them of government’s support.

The governor said the magnitude of the crash and the colossal damage kept them wandering how it happened and thanked God for saving lives on ground.

He said even President Muhammadu Buhari was concerned, which made him to react to the incident.

A Bell 206-3 helicopter belonging to Quorum Aviation, had crashed into a building at 16 A Salvation Road, Opebi, Ikeja, killing three people on board.

The incident occurred on Friday around 12:13pm, but owners of two affected buildings were unhurt.

The Accident Investigation Bureau, AIB, had retrieved the black box and transported the wreck of the aircraft to their office for further investigations.