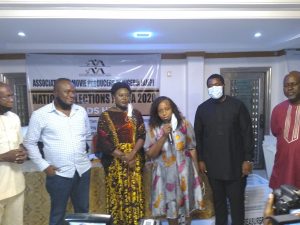 Veteran Nigerian filmmaker and entertainment executive, Peace Anyiam-Osigwe has emerged the new National President of the Association of Movie Producers of Nigeria (AMP) at an election held in Asaba, Delta.

The election which ended late on Saturday saw members of AMP from various states voted for their new leaders who would paddle the affairs of the association for the next two years.

Anyiam-Osigwe at the end of the election polled 167 votes to defeat her opponent, Mr Michael Parish who polled 3 votes, while the Vice President, Queen Blessing Ebigieson polled 165 votes to beat Miss Rose Okwoli who polled only four votes.

Anyiam-Osigwe, succeeded the immediate past president, Mr Ralph Nwadike, who had completed his two-term of two years each.

Gov. Ifeanyi Okowa of Delta, who declared the occasion opened, lauded the association for painstakingly weathering the storm of sustaining the movie and entertainment industry with little or no support from the government.

The governor, represented by the State Commissioner for Culture and Tourism, Mr Lawrence Ejiofor, said the association had attained a great success despite the economic and environmental challenges.

“You have achieved great feat on your own in the movie and entertainment industry; As a state, we have decided to support you by making you landlords in Delta.

“We have heard your challenges and I can assure you that they will be things of the past, because here in Delta, you will operate freely as landlords.

“We are building a film village for you to keep you permanently here and this project, hopefully will be ready in 2021; so, your challenge after now is to beat Hollywood,” the Governor said.

The immediate past president of the association, Nwadike, called for support from all members to enable the newly elected executive deliver on promises.

He noted that despite the challenges, the industry had achieved a lot without much of government’s support, adding that there was the need to consolidate on the achievements.

“I want you to give support to the new executive whose mandate is to deepen the association’s achievements over the years.

“Nigeria is one, we have one Nollywood, and we have one AMP, we are filmmakers and we are businessmen, we must stop in-fighting and support the new executive to enable the association get value for its money,” he said.

Nwadike thanked Okowa for his administration’s commitment to build a film village as an incentive for producers to thrive and make Delta a Nollywood base and home.

On his part, Zeb Ejiro, a veteran in the industry, said the election was a turning point for the movie industry while thanking them for chosen Asaba for the national election.

In her, response, Anyiam-Osigwe, appreciated the association for electing her as the president and pledged to deepen the achievements of the association by opening other channels to enable members to get value for their money.

She promised that the irony of the country being the second-largest producer of movies in the world, but ranked poorest would be reversed

While calling for a review of the association’s constitution to form a working document, she promised to explore opportunities in community cinemas, terrestrial television and the cable networks to ensure producers get value for their money.

“Distribution will not be a challenge as we shall explore the African market and if we can get only one per cent of the market, it will be a great gain.

“We shall build the value chain by engaging and integrating almost 70 per cent of movie producers in Nigeria,” she said.

The new president thanked the members and all who made the process of the elections possible and promised to carry everyone along in the delivery of her electoral promises.

Earlier, Macdon, the Chairman of the Election Committee, said 18 states participated in the election which was “conclusive, free and fair”.

He underscored the need for production of movies that would explore culture to promote understanding and unity among the diverse ethnic groups in the country.

On his part, Imasuen, called on the government to create the needed enabling environment for the industry to thrive.

“We need serious regulations to check piracy and the law enforcement agencies need to be educated on areas that concerns the infringement on property intellectual rights,” he said.

Imasuen also enjoined the government to give tax incentives and provide vital equipment that would help their members to produce films that could compete globally.