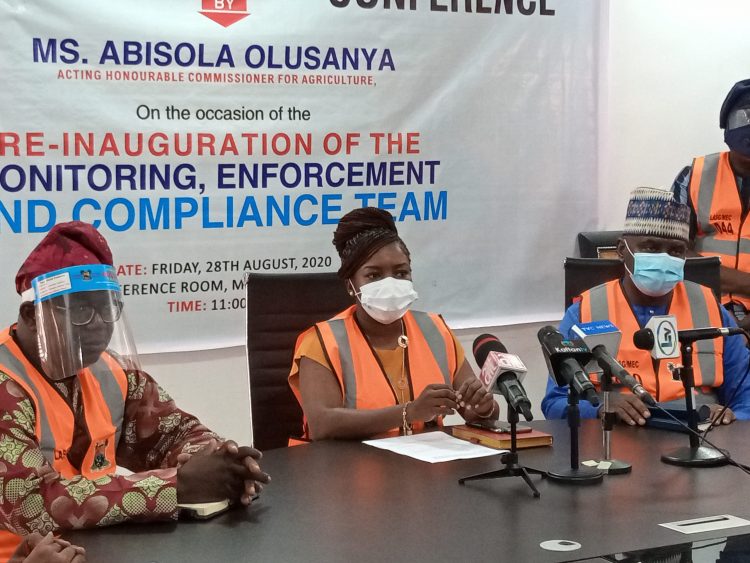 L-R: Director, Veterinary Services, Dr Rasheed Macualay; the Acting Commissioner for Agriculture, Ms Abisola Olusanya and the Permanent Secretary, Ministry of Agriculture, Dr Olayiwole Onasanya at the press briefing on the re-inauguration of the Monitoring, Enforcement and Compliance Team in furtherance of the reform in the Red Meat Value Chain in Lagos State

The Lagos State Government will begin total clampdown on illegal slaughter slabs across the state from Tuesday.

ilegal slaughter slabs have been on the increase in the state in recent time.

State Acting Commissioner for Agriculture, Ms. Abisola Olusanya, at the re-inauguration of the Monitoring, Enforcement and Compliance Team of the Ministry at the weekend said the move was to sanitise and reform the red meat value chain.

According to her, the exercise would also involve the monitoring of meat transportation as well as stray animal control.

She added that the dislodgement was necessary, especially as the State was particular about producing wholesome and healthy meat for its residents while simultaneously ensuring that the streets were free of stray animals.

Olusanya recalled that even though the dislodgement of illegal slaughter houses had been an on-going exercise for about three years now, the need to strictly enforce meat transportation using only the designated vehicles and stray animals control which had lately become more rampant could not be over emphasized.

“The need for continuity and sustained effort against perpetrators of illegalities in the State informed the re-inauguration of the MEC Unit by the current administration. You will agree with me that the menace of illegal slaughter slabs is rearing its ugly head in the State again with attendant negative public health impact on the over twenty million populace of our dear state.

“The Government of Lagos State under the able leadership of Mr. Governor, Mr. Babajide Olusola Sanwo-Olu seriously frowns at such public health risk to Lagosians hence the reconstitution of this Unit,” she said.

The Acting Commissioner stated that the team would monitor and effect zero-tolerance to the existence of illegal slaughter slabs statewide and ensure proper regulation of veterinary activities statewide in conjunction with Lagos State Private Veterinary Premises Registration Authority.

She further said that all aspects of veterinary premises regulations, veterinary standards/compliance monitoring and enforcement would be covered by the Monitoring, Enforcement and Compliance team.

Olusanya added that issues concerning transportation of live animals and meat from government approved abattoirs to the market would also be looked into as only the Eko refrigerated meat vans as well as the Eko Live Animals Transport were permitted to move meat from one place to another.

“The MEC Team is also expected to monitor the standards of operations of all approved slaughter houses statewide in order to ensure compliance with professional best practices.

“Also, all illegal and unapproved modes of meat transportation and live animals’ transportation would be dully curtailed as only approved modes would be allowed. Suffice it to say that these modes are the Eko Refrigerated meat-vans and the Eko Live Animals Transport. The aim is to further sanitize the red meat value chain and improve the quality and wholesomeness of the meat consumed by the people,” she said.

According to her, on-going rehabilitation works were being undertaken in the 20 approved slaughter slabs in the State in a bid to improve their present state to meet international standards by converting some of these slabs to semi-mechanized abattoirs.

Olusanya pointed out that the government had been enabled to monitor and regulate the affairs of premises where veterinary activities such as treatment of animals, sales of drugs and biological took place with necessary statistics gathered from the activities of the Monitoring, Enforcement and Control Unit of the Ministry and ensured that premises which did not meet up to the standard and have refused to upgrade are dislodged.

She explained that the menace of stray animals on major roads and streets was on the high, adding that such animals, by destroying various ornamental plants, shrubs and trees of aesthetic value within the metropolis, had increased the risk of accidents and environmental degradation as well as the prevalence of the outbreak of zoonotic diseases which pose major threats to human health.

The Acting Commissioner said that since the inauguration of the stray animal control, several animals had been confiscated, owners fined to recover the animals while unclaimed ones were donated to orphanages within the state.

“In addition, the team is also to monitor and control the menace of stray animals statewide by extensive intermittent raiding of these animals off Lagos metropolis. Lagosians should by this re-inauguration expect a better service delivery in terms of hygiene, safety and wholesomeness of meat/meat products as only approved slaughter houses are to release duly certified and inspected meat to the populace. The standard of veterinary regulation and service delivery statewide would definitely be up scaled and maintained,” she affirmed.

Alabi assured that registered abattoirs and meat markets were already in compliance with all the laws by the state government concerning the reform of the red meat value chain, adding that there was no fear on their part of being affected by the activities of the Monitoring, Enforcement and Compliance Team.

“My members in Lagos State are very much ready, in fact, we have been clamouring for the re-inauguration of the enforcement team because of the many illegal slaughter houses in the State.

“We have to control the nemesis caused by these illegal abattoirs and sales of meat. Some people now have even taken laws into their hands; when the State gives a law about something, they do the opposite which our association is not happy about.

“That was why we appealed to the State Government to revive the Monitoring, Enforcement and Compliance Team so that these measures will be totally complied with,” Kazeem said.

In the same vein, the Secretary of the Lagos State Abattoir Concessionaires Forum, Mr. Hamzat Kareem noted that the re-inauguration of the Monitoring, Enforcement and Compliance Team would curb the menace of illegal abattoirs as they posed a huge threat to legal abattoir operations.

“We hope that this will curb the menace of illegal abattoirs because they are posing a huge threat to our businesses as legal operators. It will also help in ensuring that wholesome meat is produced for the populace reason being that in all the approved abattoirs in the State, we have veterinary doctors that monitor the quality of meat produced.

“At the end of the day, you will find out that meat being pushed out to the public for consumption will be monitored,” Kareem stated.