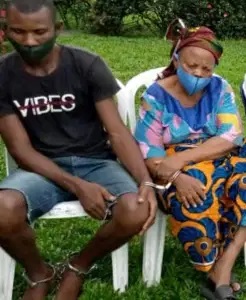 * Suspect earlier arrested for kidnapping of a nursing mother and theft of her six months old child.

The Rivers State Police Command has paraded one Chinedu Nwachukwu and a 68-year-old woman, Mrs Mary Ishmeal for allegedly buying and selling  a three-month old baby for N350,000.

The main suspect, Nwachukwu, stole the three months old baby from one Chinonye Queen Uzoma, who he killed before taking away her baby.

The suspect  led the Police to a building in Igwuruta where the decomposing body of the woman was found after he was arrested.

The murdered woman was identified by her relations through her hair do.

The suspect told the Police that after killing the victim, she sold the baby to the 68 years old woman for N250,000 who later sold the baby to another woman who is yet to be arrested at the cost of N350,000.

Mrs Ishmeal told journalists that she helped  Nwachukwu to sell the baby for N350,000, but she eventually sold the baby for N250,000.

The suspect had confessed  earlier confessed the she kidnapped killed Uzoma,  the mother of the three –month- old- baby and sold the baby at Igwuruta community in Ikwerre local government area for N350,000.

She said the suspect was sharing the same fence at Igwuruta with her late sister.  She said her sister was declared missing and they reported to the Police Station at Igwuruta.

But she said the family was later called by the Police to come and identified a corpse that seems to be like her late sister.

Mrs Blessing revealed that the suspect further said the deceased’s baby was sold with the help of one Ishmeal for the sum of N350, 000.

Nwachukwu had earlier been arrested by policemen on Stop-and-Search at Omerelu nipping Point in Commercial bus going from Port Harcourt to Owerri over a similar case of child theft.

On checking the bus, they saw a man who was later identified as Chinedu Nwachukwu, 23 years old with a five month old baby.

On interrogation, he could not give a reasonable account of how he came by the child.

He was immediately handed over to the Divisional Police Officer, Elele Division, who further transferred the child and the suspect to the State Criminal Investigation Department, SCID.

Consequently, the suspect led Police to the uncompleted building where the mother of the child was dumped.  She was rescued unconscious state and was taken to the hospital for medical attention.