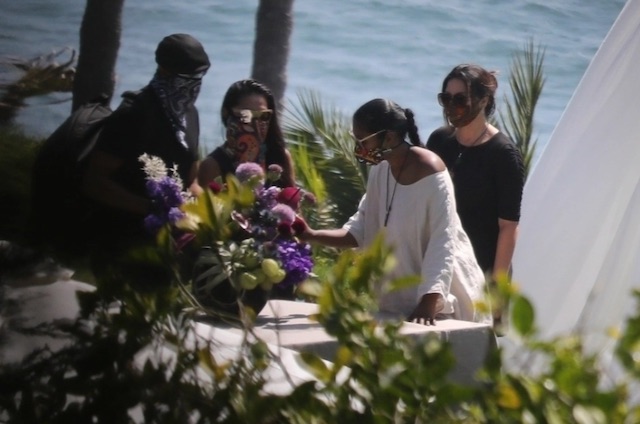 Taylor Simone Ledward at the memorial for Chadwick Boseman in malibu

Black Panther star Chadwick Boseman, who died on Friday, August 28, has been laid to rest in a private ceremony in Malibu, California.

His body was reportedly cremated and the ashes spread into the sea, in compliance with his wishes.

The ceremony was graced by his wife, Taylor Simone Ledward, and Boseman’s co-stars in Black Panther.

Among them were Boseman’s friend Michael B. Jordan, Lupita Nyong’o, Winston Duke, and other loved ones.

The private service included music from a hang drum and a picture of the late actor in a floral display.

Jordan, who played Erik Killmonger in Black Panther, described Boseman as a mentor in his touching tribute.

Prior to Boseman’s private burial ceremony, the star was remembered on Thursday as a hometown hero in South Carolina.

The city paid tribute to Boseman in a public memorial.

Some artwork of Boseman was also displayed onstage during the tribute.