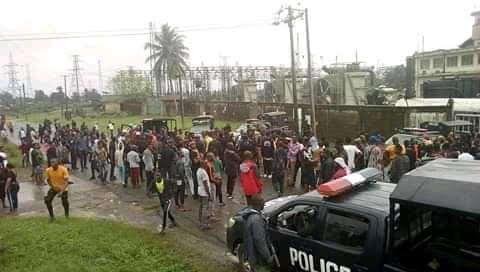 Youths and women of Oyigbo Local Government Area of Rivers State are protesting at the Afam Power Station following the expiration of the 72-hour ultimatum given to the Port Harcourt Electricity Distribution Company (PHED) and DISCOs to restore power supply in the council.
The issue of lack power for the area had earlier led to a protracted crisis between the LGA and PHEDC over the  disconnection by the PHED for about two months due to an accumulation of electric bills running into billions of naira.
The protest on Wednesday morning, it was gathered, was convened by the Oyigbo People’s Assembly , OPA, with support from stakeholders and pressure groups from the LGA.
Stakeholders had on the September 3 given  PHED 72 hours to restore Power to Oyigbo or risk shutdown of Afam Power Plant.
OPA’s warning was contained in a statement jointly signed by the Oyigbo Community Leaders Forum, and the National Youth Council of Nigeria, Oyigbo Chapter.
According to the document, “it is on record that we have exhausted all peaceful engagements, the last being the meeting held in Port Harcourt on 27th of August, 2020 at the instance of the DSS in which all the operators, including SPDC, Afam Plant Place, TCN, Rivers State Government represented by the Commissioner for Power and PHEDC, where it was unanimously agreed that our light should be switched on.
“However it is either that, this resolution from the state and federal government agencies was not understood or that it was but disregarded with reckless abandon,” the statement read.
OPA said it has become provocative for the PHEDC, IOCs and federal government agencies to plunge Oyigbo into darkness for over two months with its attendant consequences on the people.
At the time of filing this report, the protesters barricaded the only access road to Afam Power Plant, which is also in deplorable state of disrepair.
Tags:   Blackout