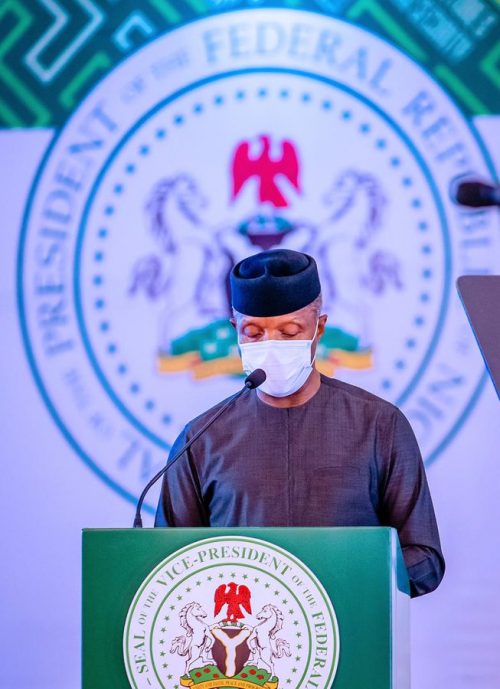 Vice President Yemi Osinbajo has debunked the notion that victims or potential victims of sexual harassment are architects of their fate.

Osinbajo expressed this view on Wednesday at a webinar on Anti-Sexual Harassment.

He said it was wrong to believe that victims of sexual harassment triggered it by their attitude, dressing or willingness to be in a compromising place with their violators.

The theme of the webinar was, “Finding Safe Spaces for Female Students in Nigerian Universities.”

It was organised by the Obafemi Awolowo University, Ile Ife.

The event was based on the book authored by notable journalist and former presidential spokesman, Mr Olusegun Adeniyi, titled Naked Abuse: Sex for Grades in African Universities.

The vice president said the idea of blaming the victim should be resisted in every situation.

“The victim must always be seen as the victim; there cannot be an excuse, especially given the power configuration between students and lecturers, that the victims could have somehow invited the abuse upon themselves.

“ I think it is an important consideration to be made and we must not allow that notion to persist.

He said that there was also the comparison sometimes made between demanding bribes for service and sex for grades.

According to the vice president, people will argue sometimes that a bribe is a bribe and there is no reason why the punishment for sex as the currency of the bribe should be stricter than an ordinary bribe.

Osinbajo said developing and adhering to a set of ethical codes of conduct for conversations and interactions involving lecturers and students in universities would greatly address the problem.

“To ensure that both faculty and students are sufficiently clear about the issues and rules, there is a need for a code of conduct or ethical guidelines based on best practices in appropriate student/lecturer interactions.

“It is important that these are clearly defined in ethical guidelines that are contained in some documents that people can refer to and see.

“It is important both for the lecturer and the student that there is some reference to some code of conduct,” he said.