Explosion averted as tanker with 60,000 litres of PMS falls in Lagos 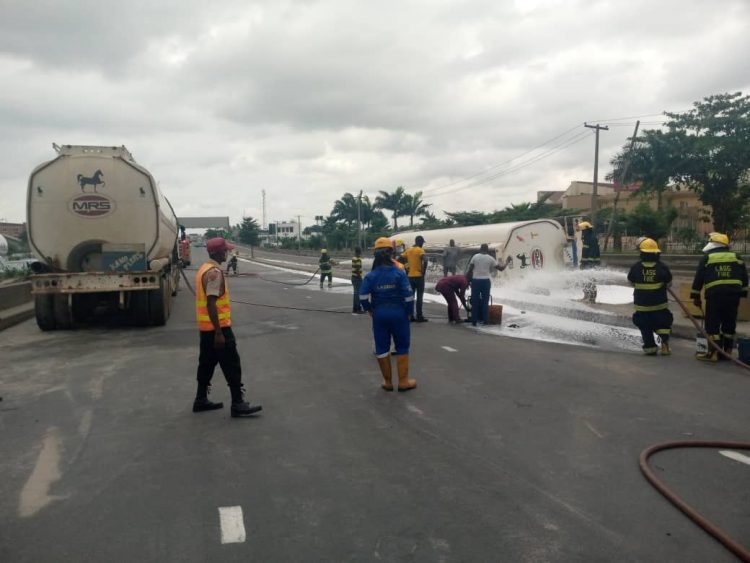 Explosion has been averted at Anthony area of Lagos, as tanker conveying 60,000 litres of fuel fell, spilling the content.

For the timely intervention of officials of the Lagos State Emergency Management Agency, LASEMA, and other responders, an explosion may have occurred.

Director General, LASEMA, Dr. Femi Oke-Osanyintolu said upon arrival at the scene of incident, it was discovered that an MRS tanker with unknown registration loaded with 60,000 litres of PMS fell sideways as a result of mechanical fault.

He said the tanker was presently spilling its content on the road thereby obstructing vehicular movement on the main carriage way.

“However, no loss of life nor injuries sustained at the scene of incident.

“LASEMA Response Team, LRT, LASG Fire Service, LRU Fire unit, LASTMA, FRSC and Officers of the Nigerian Police Force are responders at the scene working together to evacuate the accidented tanker off the road to restore normalcy along the axis and prevent any secondary incident as the entire area have been cordoned off by the LRT while traffic had been diverted.

“The entire scene of incident have been blanketed by LRU Fire Unit and LASG Fire Service while awaiting the arrival of an empty tanker for trans-loading,” he said.