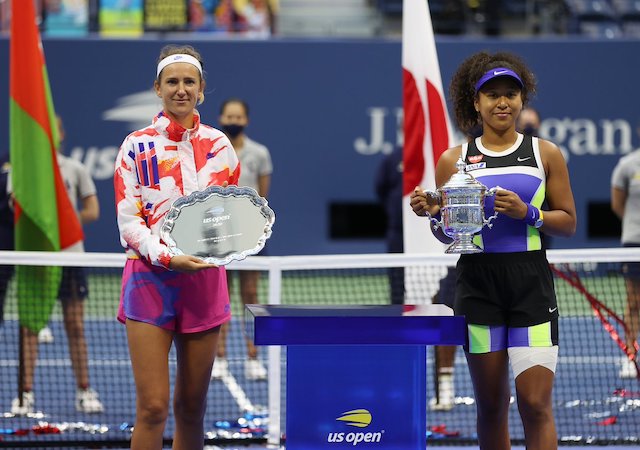 Naomi Osaka, the US Open champion and the finalist Victoria Azarenka

After shaking off a 1-6 thrashing in the first set, the Japanese star rallied to beat her opponent 6-3 6-3 in the last two sets, to win the championship.

It was her third Grand Slam victory, in all.

The victory allowed the 22-year-old to maintain her 100% winning record in Grand Slam finals while Azarenka was denied a U.S. Open crown for a third time having also finished runner-up in 2012 and 2013.

Still it was a remarkable and unexpected run for the 31-year-old Belarusian, who was playing in her first major final in seven years.

It marked the first time since Arantxa Sanchez-Vicario in 1994 that a player had dropped the first set of the women’s final and fought back to win the title.

Azarenka took the first set in 26 minutes, after breaking a sluggish Osaka twice.

But in the second set, Osaka shook off a 0-2 deficit to rally and win the set 6-3, forcing a decider, which she also won with same margin.

“For me, I just thought it would be very embarrassing to lose this in under an hour so I just have to try as hard as I can and stop having a really bad attitude,” Osaka said of her turnaround after the first set.

In her on-court interview, Azarenka congratulated Osaka and said: “I thought the third time was a charm but I guess I’ll have to try again. I’m very happy for you and I hope we can meet in some more finals again.”

Not missing a beat, Osaka responded with a smile: “I want to congratulate Vika. I actually don’t want to play you in more finals. I didn’t really enjoy that, it was a really tough match for me.

“It’s really inspiring for me because I used to watch you play here when I was younger so just to have the opporunity to play you is really great.”