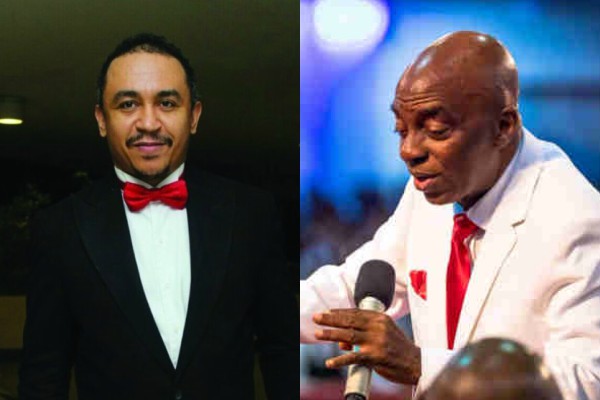 This is coming after Pastor Paul Enenche, joined a long list of pastors who called out the ace media personality for attacking Oyedepo.

Daddy Freeze had in a video he made last three years ago, criticized Oyedepo’s teaching, calling him a ‘bald-headed foul’.

The video, however, resurfaced this year and generated negative comments against Freeze after he slammed Oyedepo again over his stand that women should submit to their husbands in marriage..

He accused and threatened for insulting Oyedepo who he regarded as his father and calling Freeze ‘a bastard.’

In the same vein, Director General, Budget Office of the Federation, Ben Akabueze who also backed Bishop Oyedepo on his stand that women should submit to their husbands in marriage, accused Daddy Freeze is leading many people astray.

However, Daddy Freeze, on Saturday decided to apologize, saying that he did not intend to insult the personality of Bishop Oyedepo.

In his recent video shared, Daddy Freeze was seen apologizing to Oyedepo, saying ‘he did not in any way intend to dishonor, disrespect, or disregard the person of the Bishop’.

I’m passionately committed to the aphorism of the Free Nation In Christ, but I believe a lot more can be achieved through love. ~FRZ

◄ John 2:17 ►
New Living Translation
Then his disciples remembered this prophecy from the Scriptures: “Passion for God’s house will consume me.” pic.twitter.com/1ntCklQA1o

“Scripture says if a brother sins and seeks forgiveness, forgive him 70 times 7 times! I must stress that that video was done 3 years ago.

“The man has changed. It took great courage for him to do what he has now done, and for the sake of peace and unity in the body of Christ, I urge all those who have had an issue with him to love like Christ.

Reno equally called on Ibiyeomie to withdraw his threats against Freeze and apologise to his mother.

His words: “I also call on David Ibiyeomie to withdraw the threats he made against Daddy Freeze, and apologise to his mother, Professor Elisabetha Smaranda Olarinde, because by using the words he used on Daddy Freeze, he also insulted his mother, who was completely innocent in this whole matter. “Blessed are the peacemakers: for they shall be called the children of God.”

Media aid to former president Goodluck Jonathan, Reno Omokri has reacted to the ongoing issue between Daddy Freeze and Bishop Oyedepo. Reno emphasizes that the video causing this problem is an old clip that resurfaced recently, he said Freeze stopped attacking pastors since 2017. pic.twitter.com/HziKQDccKD