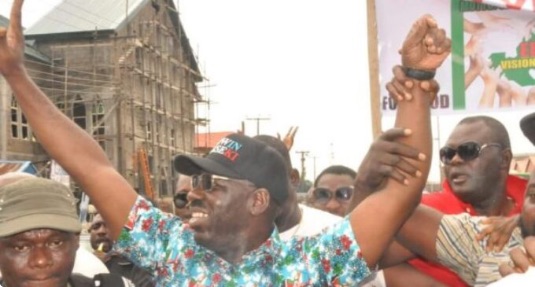 Obaseki polled 307,955 votes to defeat Pastor Osagie Ize-Iyamu of the APC who scored 223,619 votes.
Obaseki won in 13 of the 18 Local Government Areas of Edo State, while Ize-Iyamu won in five LGAs.
The governor even defeated Ize-Iyamu in his Orhionmwon Local Government. Obaseki got 13,445 votes, while Ize-Iyamu got 10,458, a margin of almost 3,000 votes.
The Returning Officer said having scored the highest number of votes in the election and met all constitutional requirements he declared Obaseki and his running mate Philip Shuaibu reelected as Governor and Deputy Governor respectively.
According to the Returning Officer,  557,443 persons were accredited for the election. Out of this figure, 540,342 people cast their votes. However 12,835 votes were rejected for various electoral infractions.
Fourteen political parties participated in the election. However it was clear from the beginning that it was a straight two-horse race between Obaseki and Ize-Iyamu.
Edo Governorship results at a Glance
Tags:   Godwin Obaseki   INEC