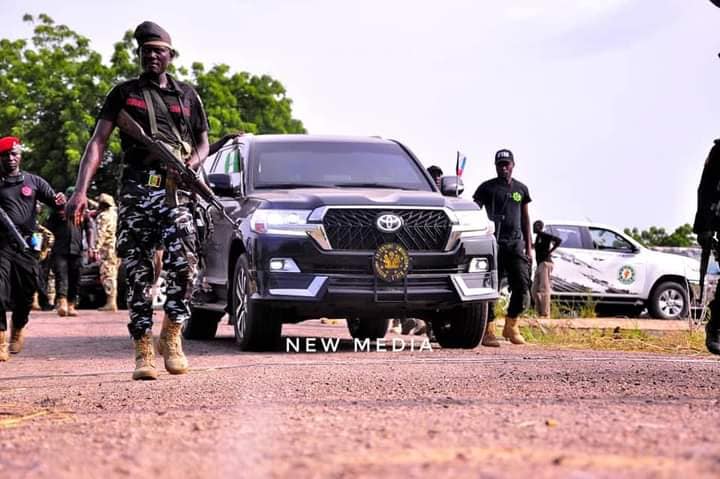 On Saturday 26 September, Nigerians learnt that the Boko Haram terrorists had attacked the convoy of Governor Babagana Umara Zulum, the governor of Borno state as he journeyed from Maiduguri to Baga.

Also widely reported was that 11 security men, eight policemen and 3 members of Civilian Joint Task Force were killed by the terrorists.

Hours later came statements by the Borno state government, the Borno Police Command confirming the attack and the casualties.

The attack, the second purportedly on the convoy of the governor drew various commentaries.

Former vice-president, Atiku Abubakar, was the first to condemn the attack on the ”governor’s convoy”, urging the Buhari Government to reset its approach to the insurgency war.

“The attack on Gov. Babagana Zulum in which over a dozen security operatives were killed between Monguno and Baga should be a source of concern not only because it is the second time such an attack is taking place in recent times, but because the Borno governor is not a soft target.

“This attack is yet another reminder that we need to adopt new strategies to deal with the menace of insurgency decisively. I convey my condolences to the families of the deceased. I solidarise with the government and people of Borno that Gov Zulum did not come to any harm.”

The Arewa Consultative Forum followed up with another reaction, published by the News Agency of Nigeria, also condemning the attack on Governor Zulum.

The ACF said the terrorists were targeting Zulum because he was raising hope in a demoralised country.

“If anything untoward happens to him, the consequences for the rest of the country will be grave.

“It is instructive to note that the attack on the governor’s convoy happened while he was trying to move some IDPs back to their permanent homes from camps.

Later on Saturday, the Presidency reacted, but described the object of the terrorist attack, as “the entourage of Governor Umar Babagana Zulum of Borno State”.

But was it the convoy of the governor that was attacked or part of his entourage?

The answer is nearer the latter.

The Borno government clearly made it clear in a statement by Malam Isa Gusau, spokesman of the governor about the attack in Kukawa LG.

Quoting Governor Zulum, Gusau said the convoy attacked was not the governor’s.

His statement spoke about three convoys.

Governor Zulum had left Maiduguri on Thursday with two convoys.

One belonged to him and the other conveyed members of a Committee on Baga Reconstruction.

“They had safely passed the Maiduguri-Baga route the previous day before the third convoy of security men was ambushed”, Gusau wrote.

Zulum spent the night in Baga and on Friday, took part in the Jumat Service, the first time in two years people would gather to pray on a Friday.

Back in Maiduguri on Saturday, Zulum expressed sadness about the attack.

“Governor Babagana Umara Zulum is saddened by this unfortunate carnage. He shares the grief of families of these 11 priceless heroes to whom Borno shall remain grateful”, Gusau stated.

“The governor prays for the repose of their souls and urges all stakeholders to remain committed to ongoing peace building efforts. Zulum is of the opinion that we must continue to keep hope alive even in the face of tribulations, and believe that with sustained efforts and prayers, Borno will eventually regain peace.

“The situation facing us is a tough one but we must choose between doing something which gives us some hope and doing nothing which will leave us more vulnerable to Boko Haram’s ultimate wish to takeover Borno and bring it under their sovereign brutal administration” Gusau said.

Conclusion: The convoy attacked by Boko Haram on Maiduguri-Baga road was not Zulum’s convoy, as his own convoy arrived Baga a day earlier. Governor Zulum was not in harm’s way. The security men attacked were part of his entourage, who chose to leave for Baga on Friday, a day after Zulum arrived the town.