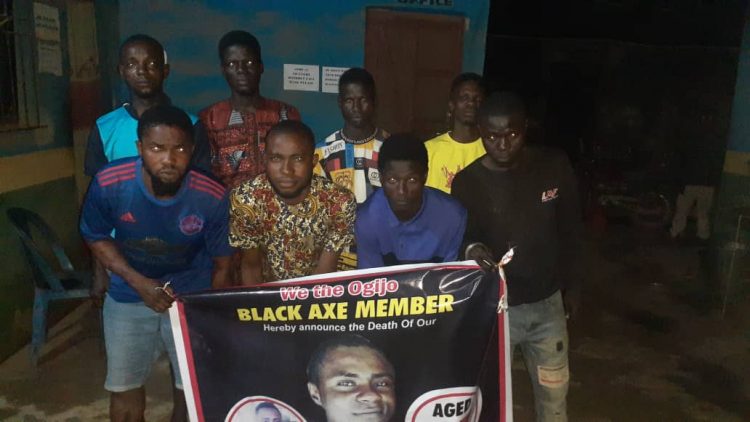 The police in Ogun have arrested and paraded eight members of Black Axe cult group who shot a 16-year-old boy during their procession.

The cultists were reportedly mourning one of their members who died recently.

The cultists were arrested following a report lodged at Ogijo Police Station where a 16-old-boy, Onome Iduru was rushed to, after being shot in the stomach by the cultists during procession in honour of their departed colleague.

The cultists, after shooting the victim dispossessed him of his phone and also went ahead to unleash terror in the community.

Upon report, the Divisional Police Officer, DPO Ogijo Division, CSP Muhammed Suleiman Baba led his men to the scene where eight members of the violent group were arrested.

A banner designed with the group’s insignia to announce the death of their member was recovered from them while the injured victim was taken to a nearby hospital for medical attention.

The Commissioner of Police, Ogun State, Edward Awolowo Ajogun has ordered the transfer of the suspects to the State Criminal Investigation and Intelligence Department for further investigation.

The CP, therefore, warned that any group or individual who engaged in any activity capable of undermining the peace of the state would be dealt with in a very decisive manner.

He appealed to parents to warn their wards not to be part of any unlawful society as the results might be catastrophic.