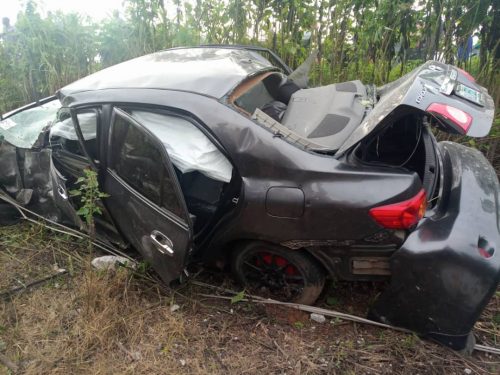 Photo from the scene of the accident

The Ogun Command of the Federal Road Safety Corps (FRSC) on Tuesday disclosed that 217 people died in 547 road traffic crashes from January to August in Ogun.

State Sector Commander, Ahmed Umar, said this during the flag-off of the last quarter of the year “Ember months’’ campaign in the state on Tuesday in Abeokuta.

Umar explained that the command rescued over 1,338 persons in different motor traffic accidents during the period under review.

According to the sector commander, some of the busiest roads in the country were within the territory of the state.

He said that the high traffic on Lagos -Sagamu, Sagamu-Ijebu Ode-Ajebandele and other expressways in the state made the state prone to high record of crashes and injuries.

Umar added that the enforcement of traffic regulations and public enlightenment against excessive speed, overloading, route violation, use of worn out tyres and other offences were aimed at preventing crashes.

“Economic and social activities increase during Ember months, these activities make the roads busier and more prone to crashes and gridlock.

“FRSC’s Ember months operation is therefore aimed at minimising crashes and gridlocks along major corridors in the country,” he said.

Etuk appealed to drivers to avoid the consumption of alcohol and hard drugs before embarking on any journey.

In his goodwill message, Gov. Dapo Abiodun, said that the state government would do all it could to improve road transportation in the state.