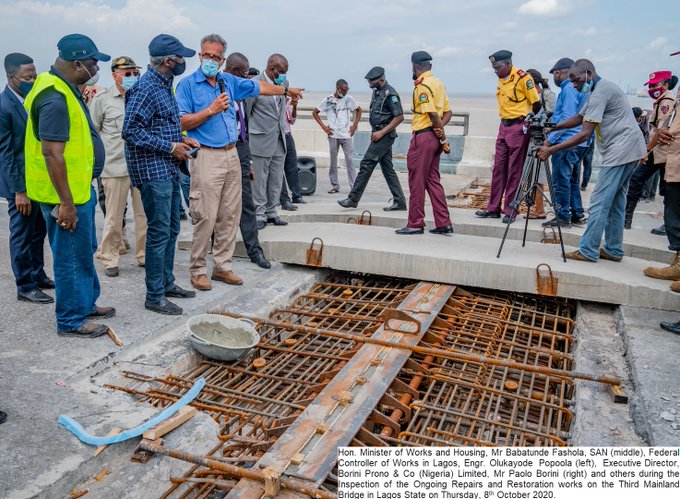 The Minister of Works and Housing, Mr Babatunde Fashola has commended the pace of work on the ongoing rehabilitation of Eko Bridge linking Alaka in Lagos mainland.

The minister climbed through the intricate scaffold stairway from ground zero to see repair works under the flyover bridge during inspection on Thursday.

After descending, the minister explained to reporters that the bridge deck had shifted and the bearings cracked and was hanging dangerously, hence its emergency closure to prevent accidents.

He explained how jacks were used to lift and fit new bearings and expansion joints to do the concrete works, as well as the technology behind some of the operations,

“Very soon we should be able to reopen the Alaka end of the bridge, I don’t want to hurry them, they think it is going to be pretty soon, we have waited this long.

“I think common sense indicates that that it would be worth it to wait so that we do not come back and redo the work.

“So, let us just give it time for the concrete to cure, let them finish, install the expansion joints and in a couple of weeks no more.

“I should expect that this should be done then we will move our work to Alaka bound side because the bearings are gone we don’t want it to get to this near emergency situation before we fix it,’’ he said.

Fashola stressed that the government was committed to the rehabilitation of the entire length of the Eko Bridge as approval had been given by the Federal Executive Council to do various repairs and installations including lighting.

He added that that over 50 bridges were currently undergoing various forms of rehabilitation works across the country in line with the government’s national infrastructure maintenance programme.

Earlier, the Federal Controller of Works in Lagos, Mr Olukayode Popoola while making his presentation said the project was 83 per cent completed and would be delivered on schedule this October.

“After fixing the expansion joint, we will put the concrete and the bridge will be opened to traffic this month.

“Right now the bridge is 83 per cent completed, the only outstanding work is the fixing of the expansion joints.

“These are the new expansion joints that we are going to fix, so we are using this rubber to clamp it down,’’ he said.

Conducting the minister through used and stored equipment, and also giving technical details Ghassan explained measures being adopted to speed up construction without compromising quality.

“The expansion joints will be opened 12 cm, there is one drum here too that was totally damaged,’’ he said.

NAN reports that the Federal Government on March 10 shut the Alaka Bridge linking Eko Bridge in Lagos for emergency repairs to prevent its total collapse.

Officials from both Lagos State and Federal Ministry of Works and their Transportation counterparts converged on the bridge at about 9:15 p.m. to take immediate decision for the closure of the threatened bridge.

Thereafter, Gov. Babajide Sanwo-Olu inspected the bridge after an early morning news briefing to usher in emergency rehabilitation of the bridge.

However, the outbreak of the COVID-19 pandemic delayed importation of components needed for the repairs.