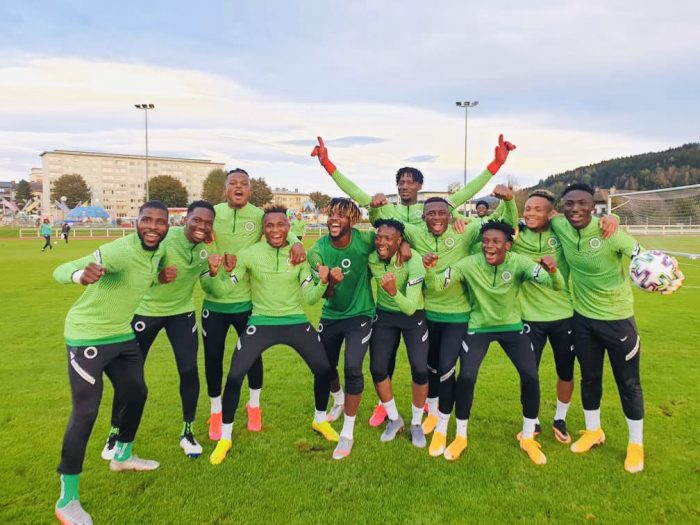 The Super Eagles of Nigeria will play Tunisia’s Eagles of Carthage at the Jacques Lemans Arena in Austria in an international friendly on Tuesday evening.

This is will be the second match played by the Super Eagles in the space of 4 days as both sides continue their preparations for the Africa Cup of Nations qualifiers.

However, Eagles of Carthage are heading into this match stronger than the Super Eagles. Nigeria lost 1-0 to North Africans Algeria last Friday, while Tunisia were 3-0 victors over Sudan in a friendly.

Nigeria and Tunisia have met 19 times in the past, across friendlies, World Cup qualifications, AFCON qualification and the Africa Cup of Nations.

The head-to-head record between these two African powerhouse sides is even, and this match could finally separate them.

Both sides have six victories apiece, with seven matches having ended in a stalemate.

Kick-off time for today’s game is 7.30pm and the game will be beamed live on AIT and SuperSport.

Rohr and his players will be hoping to pick up a win in Austria.

However, Coach Gernot Rohr will be without Oghenekaro Peter Etebo who picked up an injury last weekend while on duty with Galatasaray.

Wilfred Ndidi also sustained an adductor injury in the Premier League and is expected to be out for six to 12 weeks.

Napoli forward Victor Osimhen excused himself from this round of international fixtures, perhaps as a precaution due to the COVID-19 scare.

However, Tunisia has no injury or suspension concerns for coach Mondher Kebaier.