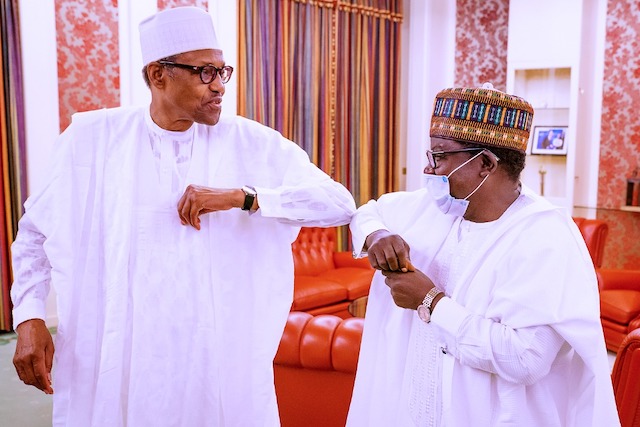 Gov. Simon Lalong of Plateau has appealed to those protesting against SARS in spite its disbandment by the president, to stop their agitation as government had met all their demands.

He stated that not all the state governors in the northern part were in support of the disbandment of SARS.

Lalong, who is also chairman of Northern Governors Forum spoke on Thursday after visiting with President Muhammadu Buhari.

The Plateau governor said some of the northern governors wanted a reformed SARS instead of its disbandment.

“Some people (including governors), said they don’t want SARS, some said they want SARS, but a reformed SARS.

“They want a reformed SARS because as far as they are concerned, some of these SARS operatives have helped them in addressing insecurity.

“If there are bad ones, holistically, bring them together and reform them.

“So, our opinion and conclusion at that stage is that let us not just say that we are throwing away the baby with bath water. If there are good ones, you don’t chase them away.

“So, as SARS is banned, we are now looking forward to the other options because most of the States in the north said no. They want SARS because SARS helps them.

“Borno said without SARS, he would not have been surviving today. Niger also wants SARS.

“So, if you are addressing this issue of SARS, you need to know what is wrong in some places. Is it the process of recruitment? Is it the character of the people? You can’t say because somebody is wrong, everybody is wrong in the country.

“These are some of the issues we concluded yesterday. It’s for the Chairman (Gov. Fayemi of Ekiti), to go and meet Mr President to still look at this issue holistically and critically so that we understand where we are going.

Lalong said he updated President Muhammadu Buhari on security developments across the northern parts of the country and also expressed support for ongoing reforms in the Nigerian Police Force.

The governor said he also briefed the president on the state of community policing in Plateau.

He disclosed that already, those recruited by the state for community policing have commenced training in Makurdi.

“As the chairman of Northern Governors’ Forum, I am here to also update him (Buhari) and to remind him about certain issues discussed with Mr President that have now taken place.

“For instance, when we had the challenge of insecurity all over the north, we called for community policing.

“So, when you see things being done, it’s good to also update him. Things are going our way now because the training of community Policemen is going on at various zones, particularly for me in Pleateau State.

“About 70 percent of those we recruited for community policing are now in Makurdi undergoing training. Just yesterday, I appointed a new coordinator, a retired Assistant Inspector-General of Police (AIG), to take care of it.

“This is to tell you that things about security should be taken seriously if we have to keep the nation united.

“Secondly, we are also aware that so many issues are cropping up and people are making suggestions which Mr President has gladly accepted.

“Some of the recommendations are disbandment of the SARS and also refunding and reform of the Police.

“These are issues that require all leaders’ contributions to Mr President so that we can have a way forward in addressing the national security of the state.’’

Lalong stated that the government must equally address the problems facing the NPF, including its financial and logistics challenges.