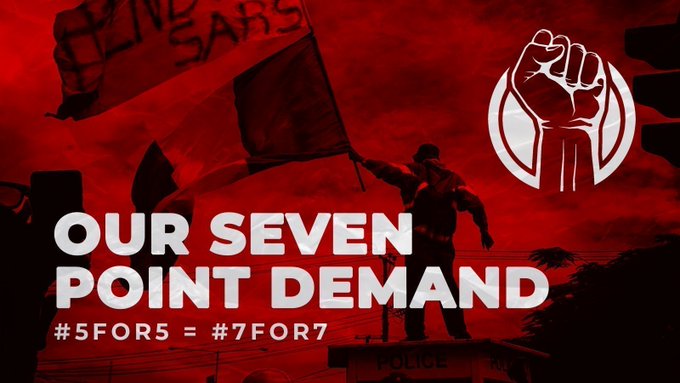 Nigerian youths serve President Buhari a seven-point demand for an end to the #EndSARS protest. Photo as seen on Twitter

Nigerian youths, particularly the ones agitating for an end to police brutality, corruption and impunity, have highlighted a seven-point demand that must be met by the Presidency.

The list surpasses the former #5for5 demands, that was earlier submitted.

Over 13,000 youths have signed a petition on a website (www.change.org) that advocates and empowers citizens from around the world to demand civic rights.

Read the full statement below

That the 5-point demand to release arrested protesters, compensate families of victims, investigate and prosecute all reports of misconduct, proscribe SARS and review the welfare of police be implemented immediately.

The focus will be on improved welfare and terms of service for the police, military and all law enforcement agencies, provide body-worn cameras for operation, refurbished housing, health, academic and pre- and post-retirement life insurance policy for the rank-and-file personnel.

Also reforms on adherence to the laws guiding discipline and prosecution of erring servicemen this should be aimed at extinguishing all notions of impunity.

We have watched over the years the waste associated with governing Nigeria. We have noted the duplication and unprofessionalism in the civil service and across all strata.

We demand an urgent budgetary framework with 50% capital expenditure and 50% recurrent expenditure in all appropriation bill.

We demand a drastic reduction in the cost of governance. We also demand that the national assembly, be first by streamlined into a unicameral legislative and be further stripped down to become a part-time job.

The huge salaries and benefits accorded them by the Revenue Mobilization, Allocation and Fiscal Commission (RMAFC) should be reduced to the barest minimum.

There had been several constitutional reviews where youths were obviously absent. Whether by omission or commission or both, the time has come for an informed and progressive participation by the youths.

We demand an urgent referendum within 90 days to begin the line-by-line review, reconstruction and upgrade of the extant constitution to be more functional for a 21st Century nation. The selection process for this referendum will have 50% young people under 60 nominated by their peers in a transparent, judicious and fair process.

We demand that credence be given to terms of citizenship over indigeneship and state of residence over state of origin.

·       One in every five of the world’s out-of-school children is a Nigerian child. About 13.2 million Nigerian children aged 5-14 years are not in school. The impact of these numbers will be felt for generations.

·       A certain percentage of this allocation should be devoted to granting scholarship to outstanding Nigerians without recourse to the tribe, religious or sex.

·       We demand a systemic overhaul in our curriculum and method of teaching to upgrade to a digital experience.

·       We demand that teachers should be incentivized to attract the best brains and should be standardized and professionalized.

·       We demand that the parent of any child not in primary school will be prosecuted to the full extent of the law.

·        We demand that there be an Annual independent external Audit of Fund allocation and project execution: from Government approval to disbursement across the ministry, which would further be used to publish at least an abridged Financial statement available digitally to ensure transparency.

·       We demand mandatory health insurance for the vulnerable population in our society as NHIS is not doing enough to serve all Nigerians. We demand that adequate provision be put in place to protect the rights and privileges of physically challenged citizens in Nigeria.

·       We demand urgent attention to mental health and a fund to set aside to create more professionals.

·       We demand proper implementation of the National Health Act of 2014, including the Basic Health Care Provision Fund).

·       We demand that there be an Annual independent external Audit of Fund allocation and project execution: from Government approval to disbursement across the ministry, which would further be used to publish at least an abridged Financial statement available digitally to ensure transparency.

We have noted the giant strides made by Gen Z and Millennials across the globe. Many multi-billion corporations where founded by both generations. In Nigeria, it is extremely difficult for such to occur. The enabling environment viz-a-viz investors and lenders confidence, stable interest rate and manageable inflation are deficit in our dear nation.

·       We demand the creation of the Youth development funds dedicated to growing the creative industries and agriculture.

·       We demand that the Not-Too-Young to run bill should be expanded to include–50% inclusion of youth under 40 in every cabinet in government.

·       We demand that the youth inclusion be monitored by the FCC as they currently monitor state inclusion and the NCDMB and other stakeholders partake in this action to protect our future.

·       We demand code of conduct reforms for all elected public office holders to have themselves and their children use public schools and public hospitals ONLY. Violation of which is immediate impeachment and recall.

·       We demand the immediate removal of immunity clause from public office holders to make them answerable to investigations at all times when and where necessary.

·       We demand the immediate resignation of every public officer found guilty of any forms of crimes and corruption step aside during investigation also.

·       Implementation of full digitization of the judicial process, prison decongestion reforms, with reforms drawn from past projects like the Uwais Report, Keyamo’s ministerial screening address, strict time limits to the determination of industries litigations, etc.