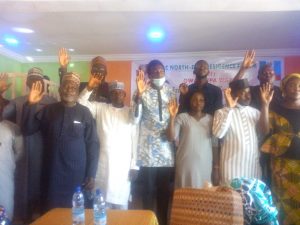 The Abuja Municipal Area Council (AMAC) chapter of the All Progressive Congress (APC), has inaugurated officials of its North-East Residents’ Forum.

The forum constitutes of members of the party from the North-East geopolitical zone resident in Gwarimpa Ward of AMAC in the FCT.

Mr Mohammad Ahmad, a lawyer, who administered the oaths of office on the new executive council members, urged them to respect their pledges and strive to uphold the tenets of democracy.

Mr Dogo Williams, Chairman, Coalition of all zones in Nigeria, in a remark, said that the new executive members were expected to unite the party toward deepening democracy.

He said that the inauguration was part of the efforts by APC’s national body to strengthen the party to win elections on all fronts.

He maintained that the party still had massive followership and was ready to win elections at all levels.

“In order to have a cohesive force, we must have competent field workers who can effectively carry out assignments.

“Such officials must be resolute and ready to serve when called upon to do so.

“They must be determined to move the APC forward, especially in AMAC.”

Tannas, who spoke on behalf of his colleagues, promised to use his office to galvanise the APC toward becoming a strong force in Nigeria’s political landscape.