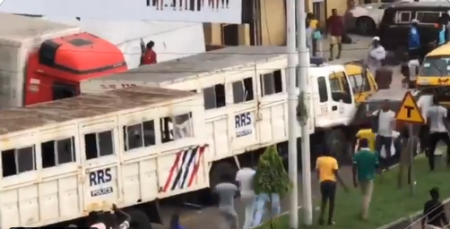 The Lagos State Police Command said on Monday that 19 of its men, attached to the Rapid Response Squad were critically injured by violent #EndSARS protesters.

According to a statement by police PRO Olumuyiwa Adejobi, the RRS men were attacked at Adekunle, Yaba, around 10am.

“The ninety seven (97) policemen, who were being conveyed to their various beats on routine relief duties across the state, came across the violent protesters who started shouting “No Police, No Police”, and stoned them.

“After the attacks, nineteen (19) of the policemen were critically injured while 4 police vehicles were damaged.

“The policemen, who scampered for safety, were eventually rescued and rushed to the Police Clinic at Panti, Yaba, for medical attention.

According to the statement, the Commissioner of Police Lagos state, CP Hakeem Odumosu, has condemned the attack.

Odumosu urged officers and men of the command to remain calm while they continue to manage the situation professionally, as usual in the state.

He further appealed to community leaders, parents and guardians, traditional rulers and religious leaders, to caution the youths against violence and any act that is capable of aggravating tension in the state.

He said the resort to violence will be counterproductive.