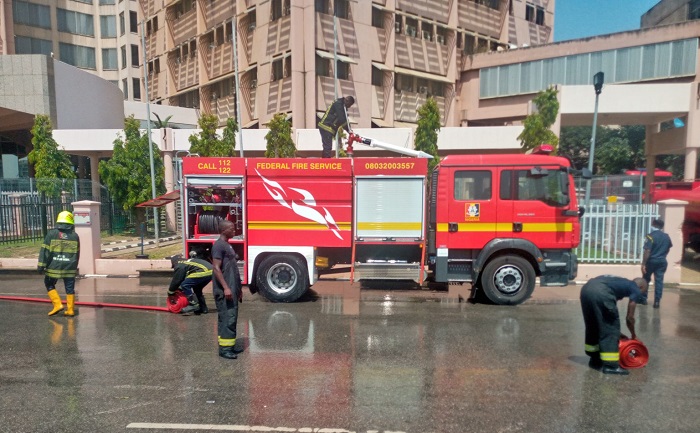 Officers of the Federal Fire Service

The Federal Government says it is poised to sustain the sensitisation against fire disasters throughout the country as the world celebrates the 2020 Disaster Risk Reduction Day.

Hajiya Sadiya Umar Farouq, the Minister of Humanitarian Affairs, Disaster Management and Social Development made this known at the sensitisation of fire exit drill to commemorate the International Day for Disaster Risk Reduction on Friday in Abuja.

The theme for this year’s celebration is: “Disaster Risk Governance”.

According to Farouq, the theme is a reflection of the ministry’s focus on strengthening the existing strategies for disaster risk reduction.

She said that the ministry’s focus on disaster risk reduction was to facilitate the development of new ones where there were gaps in line with the international best practices as contained in the Sendai Disaster Risk Reduction in 2015.

“The purpose of the fire exit/evacuation drill is to ensure effective and efficient use of the exit facilities available in the case of emergency.

“Such drills ensure orderly exit under control and prevention of panic that has been responsible for much of the loss of lives in major fire disasters.

“In 2020 alone, we have witnessed more than 20 fire incidents in both public and private buildings.

“Experience and research have shown that panic, stampede and smoke inhalation rather than the burns from fire have been responsible for the loss of lives in the major fire disasters.

“As a ministry charged with the responsibility of coordinating all actions in disaster preparedness and mitigation, we are poised to continue a sustained sensitisation of the general public to guide against unforeseen fire disaster,” Farouq said.

Meanwhile, Mr Karibu Samson, the Assistant Comptroller-General of the Federal Fire Operations said that the era of no water or fuel in fire truck to respond to fire disaster was over.

“President Muhammadu Buhari has been very good to the Federal Fire Service.

“We have taken delivery of 87 fire service trucks with each of it costing N187 million; we are spread in all zones in the country.

“Our presence in almost all states of the federation is not to take over the state fire service but to complement their efforts in combating fire outbreaks.

“As we approach the dry season, I urge Nigerians to be safety conscious; nobody should burn bushes that he or she cannot control, have fire extinguisher and blankets in your houses and call us on 112 for any fire outbreak,” Samson said.

The high point of the event was an emergency fire response and first aid demonstration relating to fire outbreak by officers of the Federal Fire Service.