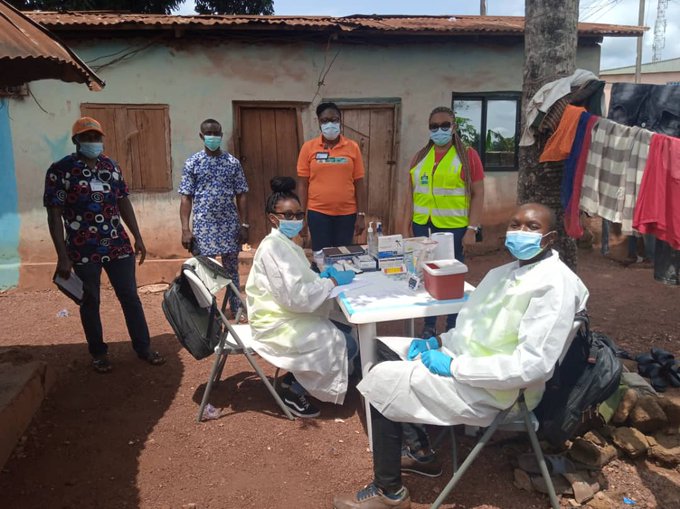 NCDC officials carry out COVID-19 test in a rural area

North western state of Katsina reported 44 cases of COVID-19 on Thursday out of the 138 announced by Nigeria Centre for Disease Control (NCDC).

The rest of the cases came from 11 states and the Federal Capital Territory (FCT) of Abuja.

Lagos, the epicentre of the virus recorded 35 cases.

The NCDC also reported two deaths and that 105 patients were discharged after testing negative to the virus.

According to NCDC figures, Kwara, Kaduna and Plateau recorded 15, 13, and seven cases.

Since the beginning of the pandemic in Nigeria in February, NCDC had tested more than 595,283 samples, out of which, 61,805 were positive.

The health agency stated that “till date, 61,805 cases have been confirmed, 56,985 cases have been discharged and 1,127 deaths recorded in 36 states of the federation and the Federal Capital Territory.”

It noted that a multi-sectoral national Emergency Operations Centre (EOC), activated at Level 3, had continued to coordinate the national response activities.

Meanwhile, the agency said that physical distancing measures could help to reduce transmission and enable health systems to cope.

It advised that “hand washing and coughing into your elbow can reduce the risk for yourself and others.

“But on their own, they are not enough to extinguish this pandemic. It’s the combination that makes the difference.

“States must take a comprehensive approach, but the most effective way to prevent infections and save lives is by breaking the chain of transmission. And to do that, you must test and isolate.”