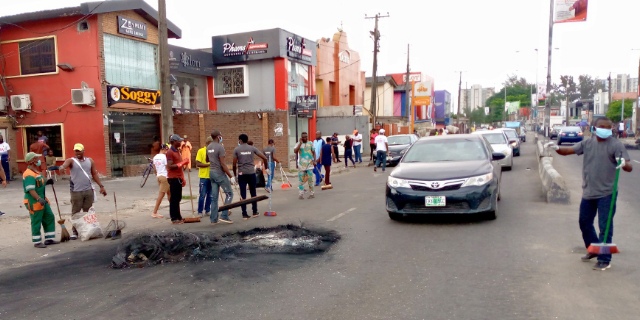 An NGO, Thyaura Partner Concept Ltd on Saturday cleaned up garbage from the aftermath of the #EndSars protest which was hijacked by hoodlums in Surulere, Lagos.

About 70 percent of the shops situated on Adeniran Ogunsanya road  axis of Surulere, Lagos state, including Shoprite, Access Bank, Sterling Bank among others suffered damages worth  several millions of Naira.

Mr Ekene Ebonyi, the Finance Manager of the organisation, said that hoodlums had taken the advantage of the break in law and order to loot some property and shops.

“This caused several damages to various small scale businesses leaving broken glasses and windows as debris on the streets  thereby hindering  the smooth movement of vehicles.

“We are here to clear such obstacles also left from the burning of tyres so that the economy can return to normalcy,” he added.

Ebonyi said that it was the killing at Lekki toll gate that escalated the whole situation which was already tensed up.

“It was after the killing at Lekki toll gate that the vandalisation across Lagos state started. If there was no killing, I am sure this would not have happened.

“It is what angered the populace which also made thugs in the society to engage in vandalisation as a way to get back to the government,” he said.

Ebonyi appealed to the government to deliver on its promises and meet the demands of the ‘Five Points Agenda’ demanded by the youths.