#EndSARS: Omotola and the search for truth in time of fake news 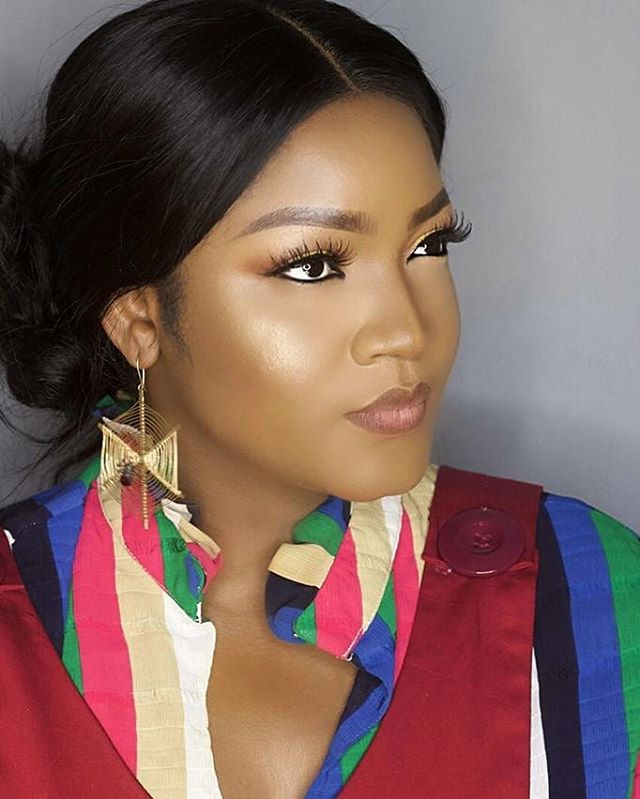 In war, truth is the first casualty – Aeschylus

Screen goddess Omotola Jalade Ekeinde is an actress after people’s hearts. She has earned their trust, affection and admiration not just because of her deft acting skills and ravishing beauty but also because of her love and concern for them.

However, the internationally-acclaimed actress drew the ire of many on Thursday, 23 October 2020, three days after the infamous Lekki Toll Gate Shootings, when men in military uniform opened fire on unarmed #EndSARS protesters when she tweeted: “If people died during Lekki Toll Assault, let their people speak out please and if there were no deaths then enough with the sensationalization because it does not removed from the crime that happened. Peaceful protesters were attacked. Why? By whom! #EndImpunityinNigeria.”

Sensationalization? No sooner had she posted that tweet on her Twitter handle than many pounced on her, calling her all kinds of unprintable names. One critic even took the criticism further to Blood Sister, a movie Omotola in which played the role of a bad girl, saying no wonder she killed Genevieve and snatched her husband.

Omotola’s experience on twitter, the backlash against her, no matter how good her intentions were, show the extent to which many would rather align with news that serve their interests, whether it is fake or not than with the truth. The truth, as the cliché goes is bitter. And many fake news have been flying around since that unfortunate incident happened in Lagos, Nigeria engaging truth in a fierce battle of wits.

Since that shooting it is only DJ Switch, one of the dramatis personae of the Lekki Shootings and the artiste who covered it live that has issued a video on Instagram, where she said 15 people were killed. Though that claim has yet to be substantiated.

While some say nine people died, others believe 15 were killed. Still others are more comfortable with a figure as high as 74. Small wonder it is termed a massacre. Still, no matter the number of figures that were killed, the truth is, soldiers opened fire on unarmed civilians, and that is bad enough. That was what Omotola was trying to say on Twitter when she was vilified.

Till now, neither the pages of our newspapers or social media have been inundated with families searching for their missing relatives or loved ones, as Omotola was trying to point out in her tweet. Yet not a few were baying for her blood. That shows the power of fake news, of propaganda in times of war. That was the reason Aeschylus, the Greek tragic dramatists, once said: “In war, truth is the first casualty.”.

Still, fake news is on the prowl, and the high number of casualties in the Lekki Toll Gate Shootings is not the only sensational story flying around that has not been proved yet. Others that have been peddled in the days leading to that shooting later turned out to be false. However, before they were proven to be fake news they had done so much damage to our individual and collective psyche.

One of such fake news that made the rounds immediately after the Lekki Toll Gate Shootings was the photo of a man carrying a lady clad in a blood-stained flag. Many believed that lady was killed in that onslaught. Popular Nigerian artiste, Yemi Alade, who has over 12miliion followers on Instagram, even shared that photo on her account. But when a lady drew her attention to it, saying that photo was fake, she deleted that post. But that image was also shared by many Nigerians.

That photo, which many peddled around as one of the aftermaths of the Lekki Toll Gate Shootings, was not taken there. Rather it was originally taken from a drama staged by the Akwa Ibom state chapter of the Nigeria Christian Corpers Fellowship (NCCF).  The drama, entitled: “Lord, Heal Our Land”, was staged in commemoration of Nigeria’s 60th independence anniversary held on October 1.

In a statement, NCCF debunked the claim that the lady in the photo died in the Lekki Toll Gate onslaught. Saying she is still alive.  “This is to inform the general public that the picture trending online of a man carrying a lady covered in Nigerian flag appearing dead is a picture from the NCCF Akwa Ibom state, stage drama night tagged “Lord, heal our land” on October 1, 2020 at the NCCF state secretariat.

“The lady in question is alive. We are standing with the youth on the #EndSARS and the #EndPoliceBrutality peaceful protest. We call for a new Nigeria where peace, righteousness an justice reigns,” the statement read.

Another photo that made the rounds in the days leading to that Lekki Shootings was that of a lady crying on a statue while holding up a wrapped up Nigerian flag. It was said that the lady refused to fly the flag in protest of her three US-based brothers who were extorted and killed by SARS and their bodies dumped in a well immediately after they arrived in Nigeria.

That photo later turned to be false when the lady in question, Ugwu Blessing Ugochukwu, who was one of the #EndSARS protesters in the South-East, debunked it. According to her, though she was detained sometime by SARS sometime in 2018, none of her brothers were killed by them. Betty Irabor, journalist, publisher and mental health advocate, tweeted a screenshot revealing a conversation with the girl who denied losing her brothers.

“I had a brief chat with Ugwu Blessing Ugochukwu whose image with a folded flag at the Enugu protest trended days ago. She denied losing her brothers to SARS. It’s 100% fake news. I am the victim. I will share my story later,” Irabor said.

Still, a day after the Lekki Shooting, social media was rife with the story of how Oke Obi-Enadhuze  a software developer  who helped build a blood donation app for Life Bank Services, was killed by the police in Makinde Police Station when a stray bullet from a shootout between them  and thugs hit him on his neck. The intriguing thing about Obi-Enadhuze’s death is that the fresh graduate of the University Of Ado-Ekiti was killed three hours after he had tweeted: “Nigeria will not end me.”

However, even though that story had gone viral on the internet, it turned out to be false. Obi-Enadhuze’s brother, Daniel, later said in a series of tweets that his brother was not killed by a stray bullet, as was earlier reported, but was stabbed by thugs that had attacked the police station. But before then the story had done a lot of damage, as it had fuelled an already tense situation in the day following the Lekki Toll Gate onslaught.

“I, my brother and mother lived at Makinde police barracks, Mafoluku, Oshodi, Lagos State. Today at about 11 o’clock in the morning, the police station at Makinde was attacked by thugs who wanted to destroy the station, I, my mum and brother were holed up in our house.

“The attack went on for hours before the thugs eventually breached the police and proceeded to set the station on fire, after accomplishing this, they set their sights to the barracks and began the assault, they proceeded to destroy every car in the barracks, my mum’s two cars were destroyed and set on fire and then they infiltrated our house by breaking the door.

“They then proceeded to ransack the house and carted away everything we own, my brother on trying to get them to take everything but spare us was pushed to my mom’s room and stabbed on ,the neck, the attacker then proceeded to attack me but missed my neck but got my chin instead,” Daniel tweeted

Nobel Laureate, Professor Wole Soyinka, is not free from the whirlwind of fake news blowing across the land, as he has also been a victim. In an article entitled: Identity Thieves on the Rampage, the literary icon and professor of comparative literature reacted to a viral video urging the Igbo to leave Yoruba land. The Nobel Laureate is deeply pained by the fact that the purveyor of that fake news whom he called a lunatic fringe “has exhumed, and embarked on circulating an ancient fabrication once attributed to me and vigorously denounced.”

“That statement impudently expounds, as my utterance, what the Hausa want, what the Yoruba want, and what the Igbo want. Such an attribution – let me once again reiterate – is the work of sick, cowardly minds that are ashamed, or lack the courage, as the saying goes, ‘to answer their fathers’ names. At least the current ethnic rabble-rouser has the courage of his convictions, not so the sick brigade of identity thieves.

“Normally, one should totally ignore the social dregs. However, in the present atmosphere where fake news is so easily swallowed and acted upon without reflection, I feel once again obliged to denounce this recurrent obscenity.

“As for our brother and sister Igbo, I hope they have learnt to ignore the toxic bilge under which some Nigerian imbeciles seek to drown the nation,” Soyinka maintained.

Soyinka also implored social media platforms to stop being avenues for people to peddle fake news, especially ones intended to cause ethnic tensions. “It is time also, I believe, to also enter the following admonition: one cannot continue to monitor and respond to the concoctions of these addicts of falsehood, and their assiduous promoters who have yet to learn to wipe the filth off their tablets.

“The patrons of social platforms should develop the art of discrimination. Some attributions are simply so gross that, to grant them even a moment’s latitude of probability diminishes the civic intelligence of the recipient,” he said.

Professor Bolaji Akinyemi, a former Foreign Affairs Minister, has also, in a  video recording he sent out, denied ever writing any incendiary article.

Former governor of Lagos State and chieftain of the All Progressives Congress, Asiwaju Bola Ahmed Tinubu has not been spared either. In the wake of the #End SARS protest that rocked the country recently, it was rumoured that he had jetted out to France where an angry mob chased him back to Nigeria. However in a chat with newsmen, after paying a sympathy visit to the Governor of Lagos State, Babajide Sanwo-Olu yesterday over the damage of some public and private properties by angry youths in the state, he debunked the rumour, describing it as fake news.

“I didn’t go nowhere; I’m a Lagosian and I still hold the title of Asiwaju of Lagos and I am still a Jagaban.

“Fake news is all over the place. They said Seyi my son was kidnapped and was chased but look at him. I didn’t pay a penny to bring him here,” he said.

Fake news is indeed everywhere. Funke Egbemode, Commissioner for Information and Civic Orientation, State of Osun, has also drawn the attention of the media to a fake statement purportedly issued by a so-called Ministry of Information and Strategy in her state.

“I have seen a fake statement purportedly issued by the Ministry of Information and Strategy.  For one, there’s no Ministry of Information and Strategy in Osun. Two, no statement has emanated on the Ede incident from the State Government and most importantly,   I do not speak or write English as used in the fake statement. I sincerely appreciate those who have called to show concern and support. God bless you.”

-Nehru Odeh is a Nigerian writer and journalist. Author of The Patience of an Embattled Storyteller, a book that foresaw the adoption, rape and murder of females by terrorists in Nigeria, his interests include popular culture, the arts, politics, business and sports.