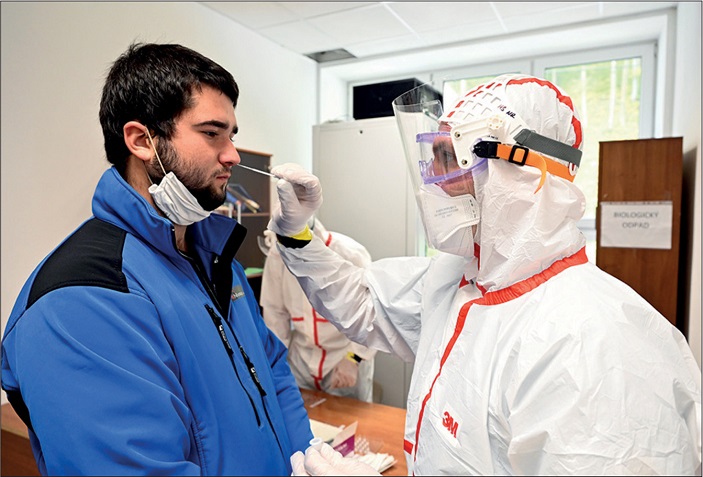 Slovakia on Saturday commenced a programme to screen its entire population for coronavirus with antigen tests in what would be a global first, with critics saying the plan is poorly thought out.

Antigen test is a COVID-19 test that detects certain proteins in the virus using a nasal or throat swab to get a fluid sample. They can produce results in minutes.

About 45,000 medical workers, army and police are being deployed to carry out the tests in the EU member state of 5.4 million people, collecting swabs at around 5,000 testing points.

On October 23, 2020, an initial 3-day pilot testing scheme began in four regions in the north of the country that has become infection hotspots.

This is ahead of mass testing of the rest of the population on the two weekends of October 30 – November 1, and November 6 – 8.

However, questions remain about the effectiveness and safety of an operation that was only announced 2 weeks before it was due to begin.

Some infectious disease experts have warned that the plan could put people’s health at risk and undermine public trust in measures to contain the virus’s spread.

The number of COVID-19 cases has risen rapidly in Slovakia since the end of the summer.

The country garnered international praise for its response to the virus in the first wave of the pandemic. Slovakia‘s first identified SARS-CoV-2 infection was in early March, and between then and September, it had recorded relatively few infections, with new daily cases rarely rising beyond 100.

However, in the past 3 weeks, thousands of new infections have been identified per day, with the proportion of infections per number of people tested at just under 16%.

Government ministers have called the numbers alarming and had warned that, unless the spread of the virus is slowed, the country’s hospitals could be on the brink of collapse within weeks.

For the mass testing, thousands of testing sites are to be set up across the country and everyone over the age of 10 years—approximately 4 million people—will be asked to attend a testing site and take an antigen test.

After being tested, people must wait in a separate disinfected room and, around half an hour later will be given their results.

Anyone testing positive must remain in strict self-isolation at their home for 10 days, or they can go to a quarantine facility provided by the state.

Many shops are being closed and restrictions on movement imposed during the 3-week period of testing with people subject to random spot checks by police.

Everyone taking the test will be given a certificate to present if requested. Failure to do so could result in a fine of €1650. The testing is voluntary, but anyone not participating must self-isolate in their homes for 10 days. Breaking this quarantine also carries a fine of €1650.

Individuals older than 65 years who spend most of their time at home have been urged not to participate, but the government has said that it will carry out testing of older people in care homes. Testing will also be done in hospitals.

Leaders of the country’s ruling coalition government have backed the mass testing as the best way to combat the increasing spread of the disease. But many experts have said that although mass testing in itself is not a bad idea, Slovakia’s approach the way it is being done in is flawed.

Scientists have questioned the use of antigen tests, which WHO has said are not suitable for mass testing unless used alongside PCR tests.

Like other countries, Slovakia has seen a sharp rise in coronavirus cases although it is below the EU average.

The government is hoping to complete the nationwide testing over two days and carry out another round of mass tests next weekend.