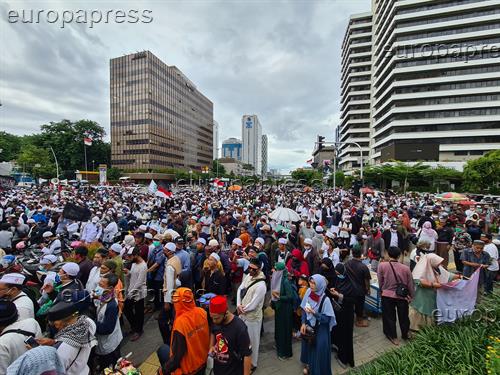 About 400 people rallied outside the French embassy in the Indonesian capital to denounce France’s handling of cartoons of Islam’s prophet Mohammed deemed offensive by Muslims.

A banner read “we condemn the insult against Prophet Mohammed,’’ referring to caricatures of Mohammed republished by the satirical French magazine Charlie Hebdo in early September.

Following a series of Islamist attacks on France since 2015 that have left about 250 dead, Macron recently set out an action plan to combat Islamist activism.

But his focus on Islam was seen by some Muslims as heavy-handed, while others took offence at some of his comments on the issue.

This includes the beheading of a Paris teacher who showed the Mohammed cartoons in a lesson on freedom of expression and the stabbings by a suspected Islamist that killed three people in a church in Nice.

Joko, who leads the world’s largest Muslim-majority nation, also criticised Macron for his remarks on Islam and French officials’ defence of the right to publish the offending cartoons.

“The comments were insulting to Muslims and have offended Muslims around the world, which could divide the global religious community at a time when the world needs to unite to face the Covid-19 pandemic.’’

Joko said freedom of expression should not be used to tarnish religion and that that linking religion and terrorism is a big mistake.

“Terrorism is terrorism. A terrorist is a terrorist. Terrorism has nothing to do with any religion,’’ he said.