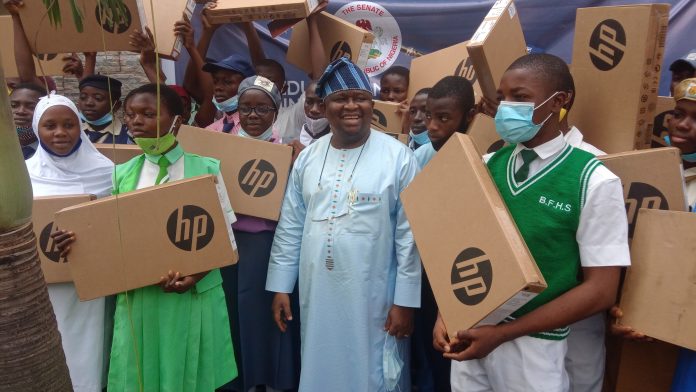 The Lawmaker representing Lagos West Senatorial District and the Chairman, Senate Committee on Finance, Senator Solomon Olamilekan Adeola, on Monday 9th November 2020, gave out 60 laptop computers to outstanding students in his Senatorial District as well as two laptops each to 35 schools in Lagos West, whose teachers he had trained in ICT.

After the National Anthem, opening prayer, the introduction of the VIPs, the address by the Lead Liaison Officer, a Chieftain of the governing All Progressives Congress and Vice Chairman, Lagos West, Chief Funsho Ologunde, gave a short address.

In his address, Chief Ologunde charged the students and teachers alike to maximize the use of the laptop computers handed over to them by the distinguished Senator. He pleaded with them not to sell the laptops but endeavour to put them into good use in furtherance of their education and careers.

The Chief Host, Senator Solomon Adeola, while encouraging the students to work harder and put more efforts in their studies, said the gesture was borne out of genuine interest for the education sector especially in his Senatorial District. He said that the laptop computers will serve as motivation to other students to do well in order to get the chance of being rewarded for their academic excellence like the recipients.

Senator Adeola also charged the teachers to put in their best as they are the molders of the future leaders especially now that we are in the era of the Internet with almost everything getting computerized in the education sector. He promised to continue to do his best in assisting the teachers to also get their rewards while still alive.

One of the recipients of the laptop computers, Adeshina Dorcas Tosin, a student of Ijaiye Ojokoro Senior College, Ijaiye, expressed gratitude to Senator Adeola for his kind gesture while promising to make the best use of it in the furtherance of her education. She prayed God to continue to guide and bless the Senator for giving back to education.

The representative of Estate Senior Grammar School, Mushin, who also benefitted from the ICT training sponsored by the distinguished lawmaker, Adeola, heaped praises on the Senator for assisting the teachers to upgrade their knowledge and remain up-to-date in this age of technology. She promised, on behalf of the school, to maximize the use of the laptop computers while asking God to bless and replenish the Lawmaker’s purse.

The highpoint of the programme was the presentation of the laptop computers to the recipients (students and school representatives) by distinguished Senator Solomon Adeola assisted by the dignitaries present.

Not done with activities lined up to interact with his Constituents, Senator Solomon Adeola also met with the traders from the Amu Plank Market, Mushin, who lost their wares and means of livelihood to a recent fire incident.

After listening carefully to the presentation made on their behalf by their Chairman, Senator Adeola promised to try the much he can to help them financially and also to get the attention of all the agencies in charge of emergencies to ameliorate their plight and aid their recovery process.

Senator Adeola doled out the whopping sum of two million, five hundred thousand Naira (N2, 500, 000) to the Amu Plank Market traders to help them in putting up their structures razed by fire. He also used the opportunity to appreciate the Lagos State Governor, Mr. Babajide Olusola Sanwo-Olu, for granting the request of the traders to be allowed to rebuild the razed structures by themselves and at their pace.

It was all shouts and cheers of “Yayi ni joo, Omo West ni jaree!” as the visibly elated Amu Plank Market traders expressed their deep appreciation to the distinguished Senator followed by prayers led by their leader for God to continue to bless and lift the Lawmaker. They promised to always mobilise and stand by the Senator in his future endeavours.