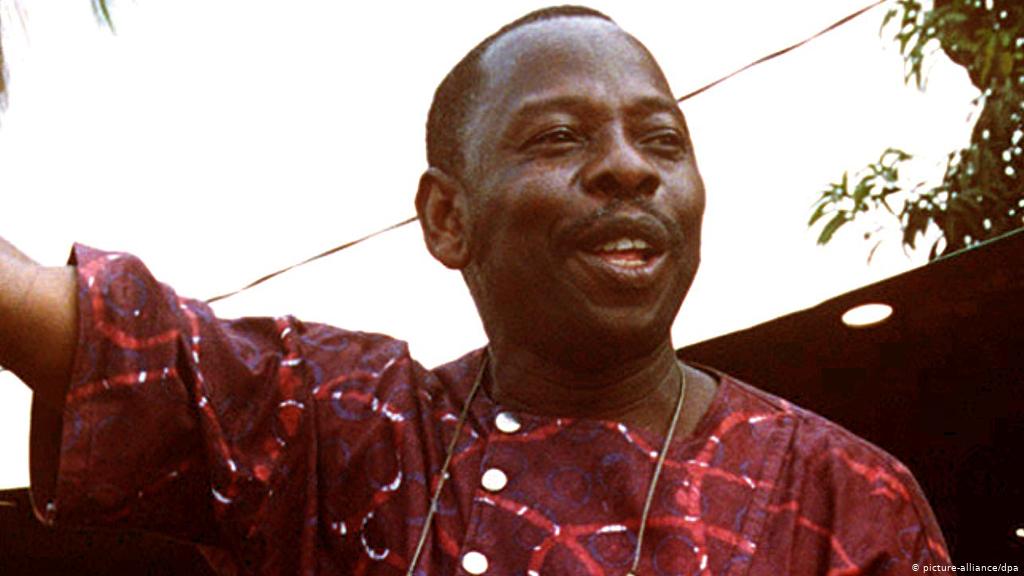 The oft-quoted saying, “You can kill a man but you can’t kill an idea” came alive on Tuesday at the ongoing Lagos Book and Art Festival when writers converge to celebrate Ken Saro Wiwa, writer and environmental activist, exactly 25 years after he was hanged by then military dictator, Sani Abacha, on 10 November 1995 while fighting for the rights of the Ogoni people.

This is because 25 years after his brutal execution not only are the issues Saro-Wiwa raised still at the front burner of public discourse in Nigeria,  nothing indeed has changed since then, especially considering the fact that the issues the writer campaigned against at the time are similar to what precipitated the EndSARS protest that rocked the country recently.

Indeed, it was a day of remembrance, of the evocation of nostalgic feelings and of sober reflections. It was also a day youths were charged to take over the mantle of activism and create the change they desire.

Toyin Akinosho, writer and journalist, set the ball rolling on a pessimistic note, saying nothing has changed 25 years after Saro-Wiwa’s death. He also spoke about why remembering the late writer is important.

“We all know that the Delta has not fared better since then. But there is something that Soyinka talks about: this lack of remembering, this whole idea of forgetting. And the thing about having Ken Saro-Wiwa on the agenda is so that we should not do what we should not have done in the first case. And as the presence of Kunle Ajibade on the panel symbolizes, the years 1993 to 1998 were some of the most difficult years in Nigeria’s national life.

“Although events of the last three weeks have begun to tell me that we haven’t moved very far away from those years … It is very important to remember that the state hasn’t played its role as an enabler of ambitions,” Akinosho noted.

However, Odia Ofeimum, poet, writer and public intellectual, went down memory lane, narrating the events that led to Saro-Wiwa’s execution, the politics involved, the distortion of facts, the series of special sessions the Association of Nigerian Authors, of which he was the national president at the time, held to secure Saro-Wiwa’s release and how after they had held the second special session they woke up that night to the news that he had been hanged.

“We woke up that night and were told he had been hanged,” Ofeimun reminisced.

Ofeimum also narrated how the murder took everyone by surprise because, ”We like to believe that. Nigeria is still a country that evil has not yet taken over and how Abacha betrayed and murdered Saro-Wiwa who was his friend at the time. According to Ofeimum he was at his wits’ end after Abacha executed the writer, as the people in power were his {Saro-Wiwa’s) friends.

He recounted the day the writer almost threw him out of his Lagos office when he spoke to him negatively about Abacha. “Saro-Wiwa almost threw me out of his office because he thought Abacha was a good man,” Ofeimun recalled.

However, Ofeimun went further to elaborate on how the powers that be at the time did everything not only to distort facts but also turn the Ogoni people against one another, and that the only way they could frame up Saro-Wiwa and execute him was to accuse him and the other Ogoni Eight of the murder of the Ogoni Four.

Ofeimun distinguished between Facts and Truth, saying they are not the same. According to him what the leaders were saying at the time could be facts they were not true.  “Fact is different from truth. What do you believe? Is it the truth that the counter insurgency was ready to tell or what actually happened? Ofeimun asked.

The author of The Poet Lied also decried how the Oputa Panel that was set up to heal wounds and reconcile frayed nerves and dissenting interests was sabotaged by the refusal of some of the political actors to appear before it, comparing it sadly to the Truth and Reconciliation Commission in South Africa, which was way different.

He also picked holes in Bishop Hassan Kukah’s account of the proceedings at the Oputa Panel in his book, Witness to History, saying it wasn’t based on truth. Ofeimun said when he learnt that he was about to present the book in Lagos, he had to make sure he was there even though that presentation also clashed with the performance of his dance drama at MUSON. “I wanted to tell him that the book could never be the truth,” Ofeimun averred.

Ofeimun also used the opportunity to lambast Dr. Usman Bugaje on his bogus claim that Nigeria’s crude oil belongs to the north, dismissing it as “the Bugaje Baggage.”

“What Saro-Wiwa fought against is not getting any better. It is getting worse … 1995 is not different from what we are today,” he lamented.

Ajibade also recounted his blood-curdling and horrendous experience at Makurdi Prison where he was at the time Saro-Wiwa was hanged.  He spoke not only about how  death stared him in the face all the time, but also about the psychological trauma he went through, the sickening  feeling that death was a constant companion and that it stalked  everyone in that prison.

“I was in jail the day he was hanged. Not just in jail, not just in Makurdi prison, I was in a condemned cell, in a condemned prisoner cell in a locked-up, a lock-up that was built by the colonial masters in the 1930s.

“Because there were no gallows, any time a prisoner is condemned to death in the prison they will transfer him to Jos where there is gallows. I was face-to-face with death all the time in that cell.

“Graffiti were on the wall. Grafitti like: ‘Cry your own cry.’ ‘Don’t tell my mother that tomorrow I will be dead.’

“And to be inside that cell when I was told that a friend like Ken had been hanged I was close to death itself … A few months after, the ghost of Ken was hovering in that cell.”

However, before Ajibade read excerpts from his book, Jailed for Life: A Reporter’s Prison Notes and from Saro-Wiwa’s book , A Month and a Day: A Detention Diary, he drew the  attention of the audience to the fact that  Ofeimun operated at the time at two significant fronts. Not only was he President of the Association of Nigerian Authors, he was also the Chairman, Editorial Board of AM News.

“And AM News, which was founded almost the same time as ThisDay Newspaper, was at the forefront of that struggle. Odia wrote many editorials in celebration of Ken Saro-Wiwa. AM News was not called Ogoni Paper for nothing. That was the first paper Ken Saro-Wiwa would send his notes to. He sent many notes. And we were getting exclusive information on what was going on in Port Harcourt prison,” he said.

On his part, Jerry Chiemeke, lawyer, writer, culture critic and author, who was just four years old when Saro- Wiwa was executed, also concurred with the earlier speakers on the fact that nothing has changed.

He drew parallels between what obtained during Abacha’s regime and what is currently playing out now.

According to him, the press is still gagged just as it was during the era of the military and those issues which were at the front burner of public discourse then, issues such as oil spillage, resource control, water pollution etc still plaguing the nation.

“The Niger Delta is even the worse off, just as it was during the Abacha era. There is still gas flaring in Port Harcourt. There is soot everywhere. There is a lot of air pollution and people are having breathing problems and even cancer,” Chiemeke lamented.

Chiemeke also stressed the need for proper documentation, making reference to the fact that though people know Saro-Wiwa as an activist, not many know him as a playwright and novelist, as many of his books are no longer in circulation.

“That for me is not good enough,” he said.

He also said proper documentation is more important in this age of social media, given the fact that information can always be tampered with and distorted, especially now that government brands dissent as fake news and there is an ongoing clampdown on journalists and peaceful protesters.

This, according to him, is necessary to avoid a situation whereby people may likely deny certain atrocities as though they never happened in the past.

Chiemeke also tasked the youths to take over the struggle, adding that the recent EndSARS protest was successful and had never happened in the history of this nation before.

“While the road is still long and there is work to be done, there is a little ray of hope,” he averred.