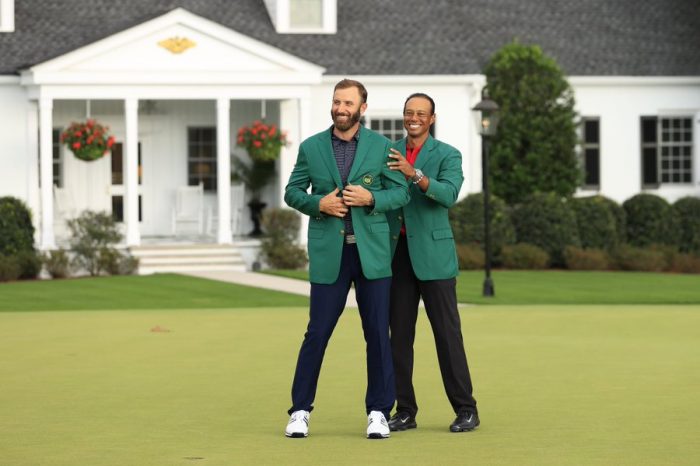 Golf world number one Dustin Johnson finally clinched an elusive second major title with a five-stroke victory at the Augusta Masters on Sunday.

He overcame a shaky start to his final round to end with a tournament-record low score of 20 under-par at Augusta National.

Johnson led throughout the final round, though only by one stroke early, and did not drop a shot in the final 13 holes on his way to a four-under-par 68 and an unprecedented 268 total.

Australian Cameron Smith and South Korean Im Sung-jae kept Johnson honest, both shooting 69 to tie for second on 15-under, but in the end they had no answer to the champion.

Defending champion Tiger Woods faded out in the tournament, carding a 76 on the final day, to record one under-par.

“I was nervous all day,” Johnson said in the traditional Butler Cabin interview before being presented with the Green Jacket by last year’s champion Tiger Woods.

“I could feel it. The Masters to me is the biggest tournament, the one I wanted to win the most.

“Having Tiger put the Green Jacket on you, it still feels like a dream … I couldn’t be more excited.”

Johnson, from nearby Columbia, South Carolina, did not get to enjoy what would have been a magnificent reception from the gallery at the 18th green.

Instead, he received polite applause from the several hundred people allowed on-site, with paying patrons absent this year due to coronavirus restrictions.

The victory, however, will go a long way to cementing the 36-year-old Johnson’s reputation as a pre-eminent player of his generation.

He previously won the 2016 U.S. Open, but before Sunday was 0-4 when leading into the final round at majors and had a reputation of frequently not rising to the occasion in the biggest moments.

Among his near misses was a tie for second behind Woods at last year’s Masters.