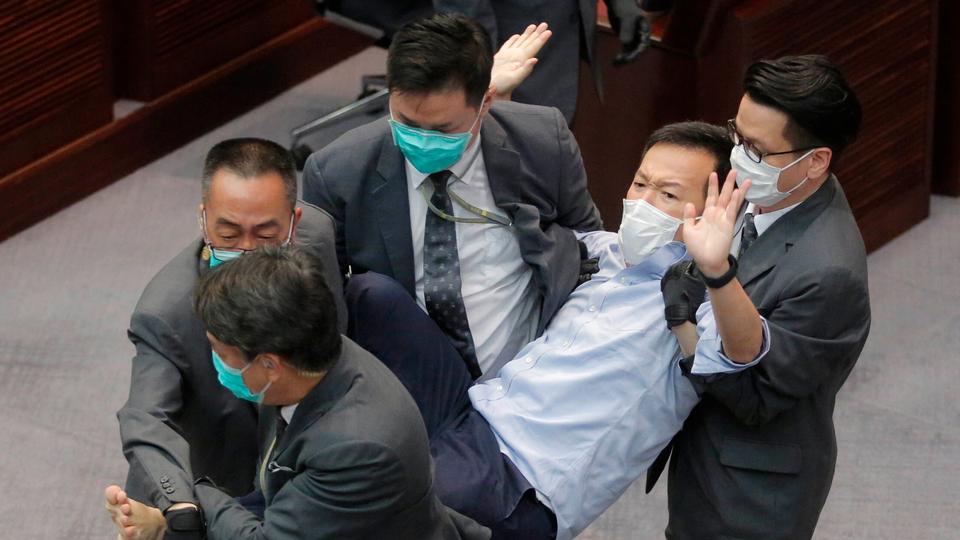 In this May 8, 2020, file photo, the former pro-democratic legislator Ray Chan is taken away by security guards during a Legislative Council House Committee meeting in Hong Kong. (AP)

Three former Hong Kong lawmakers were arrested for attempting to disrupt the debate of a bill criminalizing criticism of the national anthem in the Legislative Council earlier this year.

According to their social media accounts on Wednesday.

Chu Hoi-dick, Ray Chan and Ted Hui said in separate Facebook posts said they had been detained in connection with the incidents in May and June in which they threw smelly liquids in the chamber.

Police confirmed they had arrested three local men for contempt, intent to cause harm to others, and attempting to use harmful substances.

China has been cracking down on the democratic opposition in Hong Kong this year, as Beijing seeks to assert its authority.

Earlier, 15 opposition lawmakers resigned en masse after four of their colleagues were disqualified for failing to satisfactorily pledge allegiance to the legislature.

The six-part National Anthem Law came into effect on June 12 despite the opposition protests.

It dictates regulations surrounding the playing of the anthem, “March of the Volunteers,’’ and requires citizens to “stand solemnly and deport themselves with dignity’’ during its playing.