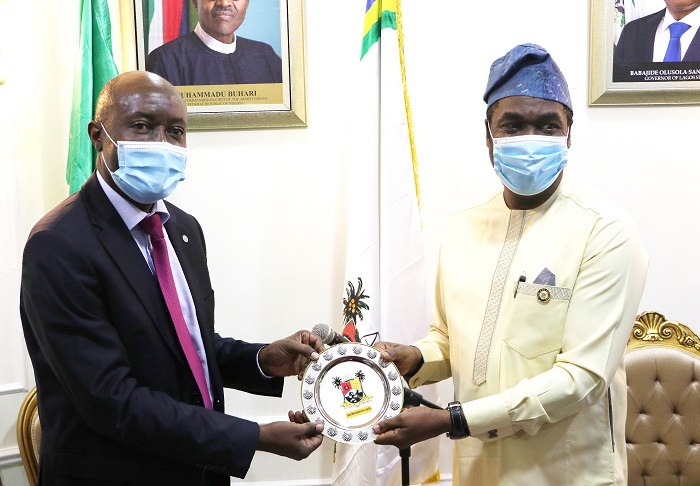 Lagos state government has solicited the technical expertise of the Food and Agriculture Organization (FOA) to develop its coconut value chain through the acceleration of production, processing, utilization and commercialization of the value chain.

The deputy governor of the State, Dr. Obafemi Hamzat who made the solicitation in Lagos when he received in audience the Representative of the Organisation to Nigeria and the ECOWAS, Mr. Fred Kafeero at his Office explained that such collaboration would help the State harness its potentials in the coconut value chain in particular and Agriculture sector in general.

He added that the collaboration would also help develop a robust database through general and specific surveys and studies such as baseline survey, local and international market survey, thematic studies, need assessment, improved and processing, marketing and management of the entire value chain.

“FAO as we know is the United Nations organ that deals with Agriculture and Nutrition generally around the World. Looking at the various agricultural sectors in Lagos, one of them being the coconut industry. We are not only looking at production alone but processing, marketing. FAO should assist us with that and managing the entire value chain.

“The organization is mainly research-based. They are a technical organization. They basically go to sites, take samples, inspect, and observe the variety of crops produced and recommend for us the right strategies they know would work. It is practical. They will also meet with farmers to suggest new global practices used in growing crops based on the research that has been carried out and the soil type,” he said.

According to Hamzat, the collaboration would also have the capacity to support and facilitate actors to sources of credit, markets and technologies for the development of the coconut value addition along processing and consumption as well as strengthen the capacities of the technical and extension services to effectively deliver coconut related technical messages.

The representative of the FAO to Nigeria and the ECOWAS, Mr. Fred Kafeero noted that coconut-related issues were very important and seeing the plans that theState has put in place to address them was a driving force for the Organization to collaborate with the State.

He disclosed that there were lots of opportunities for employment either in production, processing, packaging; income generation for different segments of the society; nutrition; as well as increasing the GDP of the country through export.

“We have come because of our very specialized mandate that will work within the overall umbrella and framework of the UN. We have many other UN entities that have abearing on Agriculture as you know Agriculture if you take the entire value chain, requires the
partnerships all over and we have all these skills within the UN.

“We learnt that there had been prior discussions way back as in 10 years ago with the FAO on this same coconut subject and upon enquiry, I learnt that there were lots of issues but I am glad that there is a new administration that is solely committed to the agricultural sector. For us at FAO, our commitment is still as firm as ever.

“I know that we can do a lot here. I see a lot of potentials, dedication, and commitment; the resources are also there. It gives us a lot of incentive to come and talk to you about this,” Kafeero asserted.

Speaking earlier, the State Commissioner for Agriculture, Ms. Abisola Olusanya disclosed that the Ministry of Agriculture would work
closely with the FAO Group to develop a master plan around the coconut value chain that the State can work with to develop and grow its coconut industry in line with global best practices.

Olusanyaexplained that the collaboration would not be limited to coconut alone but other sectors of the agriculture landscape would be explored as well.

“We know that the FAO, being the Food and Agriculture Organization of the United Nations is equipped with technical capacity and capability around Agriculture, so we can develop so much more outside of just coconut. As a Ministry and an administration, we are trying to tap into the capacities and capabilities of the FAO to be able to develop further the other value chains we have to ensure sustainable food security for Lagosians,” she noted.

The Commissioner disclosed that the coastal belt in Lagos is over 185 kilometres while the riverine belt has over 700sq kilometres adding that the State single-handedly produces well over 60% of the over 300,000 metric tonnes of coconut produced in Nigeria, which makes her the 19th nation in coconut production globally.

Olusanya said that It was also important to note that the State is the only State with an agency dedicated to the cash crop of coconut hence the need to start looking at the many potentials in the sector which could be well over 35 Billion naira in value on an annual basis cannot be overemphasised.

“The harnessing of the potentials of the coconut subsector in Lagos State is a key element in achieving the ‘M’ pillar of the THEMES agenda of the present administration of ‘Making Lagos a 21st Century Economy’. The development of this subsector will ensure sustainable food security, economic development in terms of generating revenue, improving the standard of living and local economy of Lagosians through employment and wealth creation opportunities and the overall environmental impact in mitigating against the impacts of climate change and global warming.

“If you look at the logo of Lagos State, you will see the crest of the State with two coconut trees on both sides of the crest; you also see a picture of a fisherman casting his net into the sea. This means that Agriculture is a very vital sector for Lagos State and we should begin to look inwards as an import-dependent State which is where coconut also features largely being the major cash crop we have in Lagos State,” the Commissioner averred.