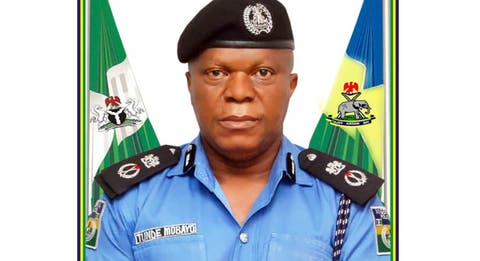 Mr Tunde Mobayo, the Commissioner of Police in Ekiti state, has debunked rumours that the Nigeria Police Force have withdrawn from Ikere-Ekiti, Ekiti State, or anywhere in the state.

CP Mobayo said in a statement issued in Ado-Ekiti on Thursday that officers and men of the police force are fully on ground in all parts of the Ekiti State.

“The Ekiti State Command of the police has no reason, whatsoever, to withdraw policemen and women posted to any part of the state including Ikere-Ekiti,’’ he said.

Rumours had it that the Command withdrew all officers and men posted to Ikere-Ekiti because of the mayhem unleashed on police formations and other properties in October when hoodlums hijacked the #EndSARS protest.

However, Mobayo assured the people of Ekiti State of the Command’s commitment to the protection of lives and properties of the citizens.

He commended the Assessment Committee of the Inspector-General of Police on the EndSARS protest, which visited the state on Nov. 15, for its dedication and professionalism.

Also, the CP commended the committee members for their sacrifices, empathy, and acceptance to embark on the assignment as well as the show of maturity and professionalism throughout the exercise.

“The Ekiti State police command, on Nov. 15, received the Assessment Committee of the Inspector-General of Police, IGP Mohammed Adamu, which came to properly document the losses suffered by the Force during the #EndSARS protest.

“The assessment visit is for the purpose of strategic planning, re-construction and re-equipment as well as for future reference.

“The Committee, headed by CP Abutu Yaro, started its assignment from Ikere Area Command where police facilities were looted and vandalised and proceeded to Ikere Divisional Police Headquarters which was looted and set ablaze by hoodlums during the protest.