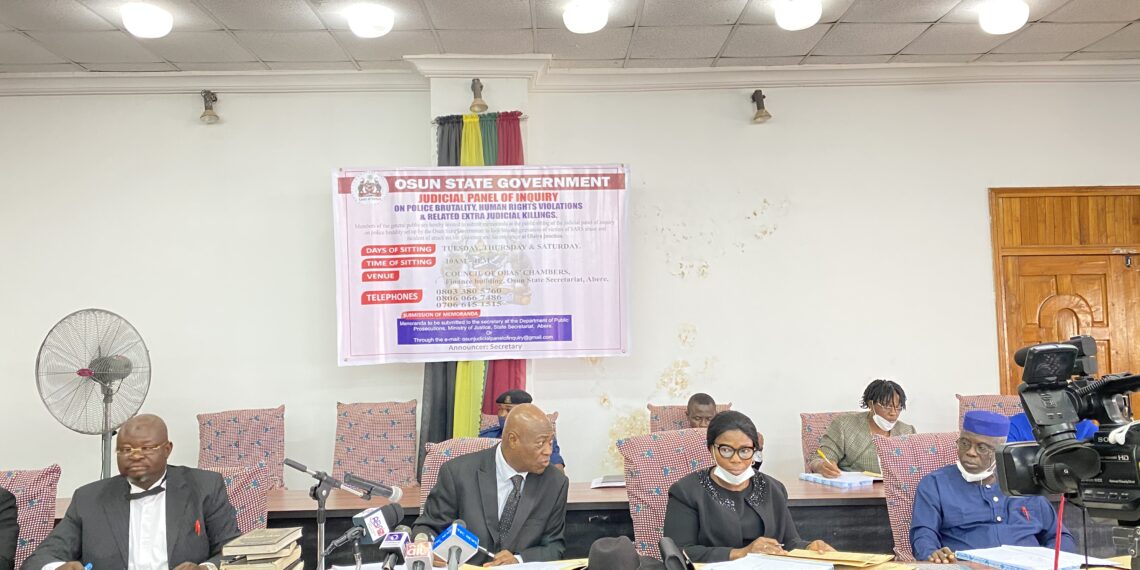 Petitioners of the Osun state Judicial Panel of Inquiry on Police Brutality, Human Rights Violations and Related Extra-Judicial Killings has expressed confidence, satisfaction at the proceedings.

So far, the panel has heard seven cases and received eleven petitions.

The petitioners on Sunday have expressed confidence in the ability of the panel to dispense justice.

This is even as the panel heard seven different petitions filed before it and granted adjournment prayers of the parties involved.

PM NEWS recalls that Governor Adegboyega Oyetola inaugurated the panel to investigate and unravel all matters relating to police brutality and misconducts with a mandate to come up with recommendations within six months.

Addressing journalists after the hearing of his case, one of the petitioners, Alhaji Ayo Dauda Adigun, said he deliberately brought his petitions before the panel due to the confidence he had in it to dispense justice.

Alhaji Dauda who prayed the court to grant him six million naira (N6,000,000) as compensation for the loss of his business reputation caused by the SARS operatives, said he had no doubt in his mind that justice would be done in his petition.

In his petition, he alleged that the SARS operatives whom he said he gave free accommodation in his Guest House murdered one of the lodgers in the Guest House, saying the incident had posed severe damage to the reputation of his business.

He explained that the incident had triggered hatred and subsequently reduced the level of patronage, a development which he claimed had caused serious economic loss and as well affected his standard of living.
Also, another petitioner, Mr Amos Odeyemi, applauded the proceedings and style adopted by the panel, which he described as fair and transparent.
Odeyemi had approached the panel to award him a total sum of twenty million naira (N20,000,000) as compensation for the injuries and pains he suffered from the police brutality in 2004.
Giving testimony to support his claims, the petitioner told the panel that he was brutalised by the police officer of the State Command who was attached to a checkpoint along Osogbo- Okuku in 2004, saying since then, he had not got satisfactory justice on the incident.
While Fielding questions from journalists after the hearing of his petition, the petitioner said in spite of the fact that the case he brought was still pending in the Court of Appeal, he was confident that the Panel would adjudicate in the matter and dispense justice.
Odeyemi who has been physically deformed due to the incident, said he had to forward his petition to the Panel, having lost patience in the protracted litigation that had taken him 16 years.

Similarly, Mrs Abosede Ibukun with Charge Number OS/JPIPB/002/2020, confidently expressed that justice would be done in the matter she brought before the court.

Ibikunle had approached the Panel on the claim that her niece was severely brutalised by a police officer while trying to escape from irate youths who wanted to lynch him.

She told the court that her niece sustained bullet injuries due to the stray bullet discharged by the alleged police officer.

Chairman of the Panel, retired Justice Akin Oladimeji expressed satisfaction in the proceedings as he reassured the general public of fairness, equity and justice.