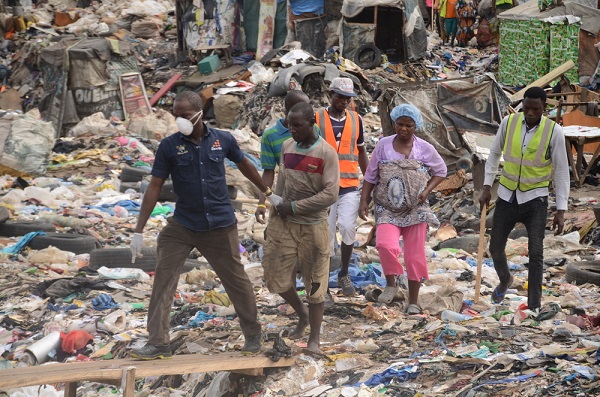 Some of the scavengers being led out of the dumpsite by Lagos Waste Management Authority (LAWMA)’s enforcement unit, during the dislodgement of scavengers from Olusosun dumpsite, on Wednesday, 25th March, 2020.

Two representatives of LAWMA and LASEPA made this pledge on behalf of the agencies in an interview with the News Agency of Nigeria (NAN) in Lagos.

They made the pledge at the ongoing National Environmental Standards and Regulations Enforcement Agency (NESREA) training for government officials on e-waste management.

The theme of the training is: “Guidance Document for the Implementation of the Extended Producer Responsibility (EPR) Programme for the Electronics/Electrical Sector in Line with Circular Economy.”

According to them, a cleaner Lagos is a priority of the state, adding that electronic importation which is on the exclusive list of the Federal government is the major source of e-waste in the country.

Mr Yusuf Olabanji, the LAWMA representative, said the agency would reform individual local waste collectors to ensure electrical and electronics waste were collected and deposited at the designated centres for recycling.

“As the one in control of import, the Federal Government knows how best to tailor import regulations to check the importation of such materials that are harmful to the environment.

“There will be incentives to encourage collectors so that the programme will be sustained and the 300 tonnes e-waste elimination from the environment achieved in the first quarter of 2021.

“We already have waste collectors network in the state, the same will be mobilised to aid Federal Government drive in e-waste management,” Olabanji said.

Mr Ayinla Sulaiman, the LASEPA representative, described the drive as important and commended the federal government for starting the e-waste pilot elimination project in the state.

According to him, the agency will deploy all within its authority to ensure the success of the programme in order to make the state cleaner.

He said that the objective of the programme was to assist the government and producers to jointly implement the EPR legislation for e-waste.

Sulaiman said that EPR was to make producers in electronics and electrical items responsible for the discarding or recycling of e-waste materials for a better environment.

Meanwhile, Dr Oladapo Dada, a Consultant to the programme, called on governments at all levels to ensure that used or new electronics/electrical items conform to environmental regulations.

NAN reports the NESREA/GEF programme was supported by UNEP.