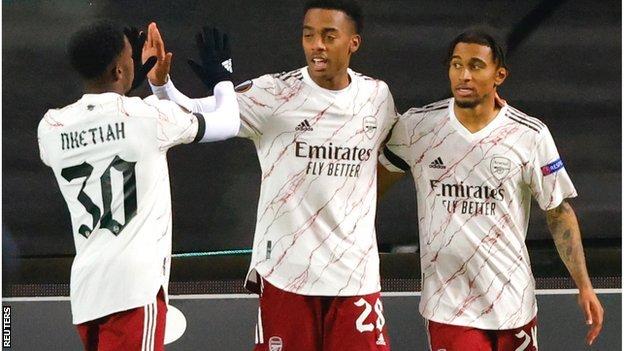 Arsenal secured their place in the last 32 of the Europa League after their 3-0 win against Molde.

Nicolas Pepe opened scoring in the 50th minute putting his red card against Leeds United behind him.

The Ivory Coast forward curled a powerful strike into the top corner.

Reiss Nelson doubled the Gunners’ lead shortly after with a tap-in from close range as Arsenal progressed to the knockout stages with two games to spare.

Substitute Folarin Balogun, 19, scored with his first touch to cement victory for Mikel Arteta’s side in Norway.

The other goal scored in the Premier League was Aubameyang’s penalty against Manchester United.

After the match, Arteta expressed the hope the players can re-enact their scoring form in Europa in the Premier League.

“This is what we want [to do]. We’ve been more efficient in this competition.

“It can be down to some of the players that we utilise in certain positions, it can be because of the opposition, there are a few factors there.

“I must say that if we want to be fighting with the big clubs, obviously the amount of goals that we score has to improve because defensively I think we’ve had four clean sheets in the last six games, which is pretty good, but offensively our numbers have to improve”.