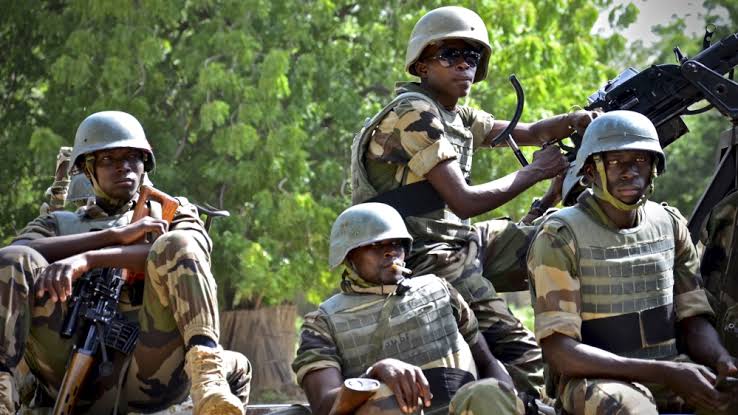 A wanted notorious bandit has been arrested by Nigerian troops at a clinic in Barkin Ladi LGA of Plateau State.

The bandit, identified as Mallam Usaini Mohammed was picked up 23 November at the Mainasara Clinic by soldiers of Operation Safe Haven, following a tip off.

Major General John Enenche, who disclosed the arrest today, said the bandit had sustained gunshot wounds in an exchange of fire with troops during an aborted robbery in Saminaka in July this year.

A similar tip off, he said, led to the arrest of another group of three armed robbers at their hideout at Dogo village in Riyom Local Government Area of Plateau State on same day.

Enenche disclosed the arrests, while rendering a weekly activity report for Nigerian military engaged in battles against bandits and terrorists.

The Defence Headquarters spokesman also revealed the arrest of a couple in Katsina by operatives of DSS in Katsina state.

The couple Usman Shehu and his wife Aisha Abubakar of Rimi Local Government Area of Katsina State were arrested on 22 November.

“The suspects were intercepted at Abukur village conveying large cache of ammunitions to Katsina Metropolis including 14 magazines, 61 rounds of 9.6mm caliber ammunition and 399 rounds of 7.62mm Special ammunition”.

The weekly report, covering 19 November and 25 November also detailed various efforts by all the security agencies, in neutralising bandits and terrorists in the main theatres of North East, North West and North central parts of Nigeria.

GENERAL UPDATE ON ARMED FORCES OF NIGERIA OPERATIONS FROM 19 TO 25 NOVEMBER 2020
1. In line with our weekly schedule, this morning I will be briefing you on operations of the Armed Forces of Nigeria in conjunction with other security agencies across the Country from 19 to 25 November 2020. The various operations have progressed satisfactorily with significant results.

NORTH-WEST ZONE
2. Troops of Operation HADARIN DAJI and other subsidiary operations have sustained various aggressive operations in the North-West zone of the country with tremendous successes. The gallant troops within the period carried out series of raids, aerial, ambushes, clearance operations and confidence building patrols.

3. Notably, on 21 November 2020, troops of Operation ACCORD while on covert operation at Galadi village in Shinkafi Local Government Area of Zamfara State neutralized 2 bandits and recovered 2 AK 47 rifles.

In another development, still on same 21 November 2020, troops while on routine patrol at Gobirawa village made contact with armed bandits. During the encounter, 6 bandits were neutralized while 4 AK 47 rifles, 3 Dane guns and 2 motorcycles were recovered. In the same vein, following credible intelligence on activities of illegal miners at Kadauri general area in Maru Local Government Area of Zamfara State, troops swiftly mobilized to the scene and apprehended 11 suspected illegal miners. The suspects have been handed over to the appropriate prosecuting authority for further action.

4. Additionally, troops of Forward Operating Base Kwatarkwashi arrested one Shafiu Suleman, a wanted bandit’s informant at Kwatarkwashi Market. Preliminary investigation revealed that the suspect was the mastermind of recent kidnapping of some Locals within Kwatarkwashi district of Bungudu Local Government Area of Zamfara State. Furthermore, following distress call on presence of suspected bandits at Gidan Ruwa along Rukudawa axis of Zurmi Local Government Area of Zamfara State on 22 November 2020, troops swiftly responded and pursued the bandits as they fled on sighting the approaching troops. However, one bandit was neutralized, while one AK 47 rifle and one magazine loaded with 29 rounds of 7.62mm Special ammunition were recovered.

Equally, two bandits were arrested in the process. In another feat recorded on 22 November 2020, operatives of Department of State Service, Katsina State Command arrested a couple Usman Shehu and his wife Aisha Abubakar of Rimi Local Government Area of Katsina State.

The suspects were intercepted at Abukur village conveying large cache of ammunitions to Katsina Metropolis including 14 magazines, 61 rounds of 9.6mm caliber ammunition and 399 rounds of 7.62mm Special ammunition.

Preliminary investigation revealed that the suspect has been supplying bandits with logistics.

6. Meanwhile, within the period in focus, the Air Component of Operation HADARIN DAJI neutralized 82 armed bandits in air interdiction missions executed at Birnin Kogo Forest in Katsina State and Ajjah Forest in Zamfara State. Both air strikes were carried out on 23 November 2020, sequel to credible Human Intelligence reports as well as aerial surveillance missions that led to the identification of the 2 forest hideouts, which housed scores of the armed bandits along with hundreds of rustled cattle.

The Nigerian Air Force fighter jets and helicopter gunships dispatched by the Air Component to attack the 2 locations took turns in engaging the target areas, scoring accurate hits on the caves, used by the armed bandits to shield themselves from air strikes. This is in addition to 17 armed bandits that were earlier neutralized at Dunya Forest area of Katsina State. This was achieved through air strikes executed on the heels of credible Human Intelligence reports and confirmatory surveillance missions indicating that dozens of Ansaru terrorist group-linked armed bandits had established a camp at the location, which also housed scores of rustled cattle.

7. The gallant troops have continued to dominate the general area kinetically, to deny bandits freedom of action. Thus, the locals are requested to continue to cooperate with the security agencies and provide necessary information that will be useful to our collective objective of eradicating criminality from the zone.

8. In continuation of our efforts in the fight against terrorism in the North-East zone, several land and air operations were conducted by the Armed Forces of Nigeria and other security agencies with significant results. During the period, troops recorded laudable successes in both land and air operations. Between 19 and 25 November 2020, troops of Operation LAFIYA DOLE maintained their usual aggressive and responsive postures throughout the North East theatre of operation. The operations include; aggressive fighting patrols, clearance/ambush operations and artillery bombardments as well as comprehensive air operations involving aerial surveillance and air interdiction missions as well as decisive air strikes. These operations resulted in the neutralization of scores of the terrorists in various locations, rescue of kidnapped victims, destruction of terrorists’ enclaves and recovery of arms and ammunition from the terrorists.

9. Notably, on 19 November 2020, own troops acted swiftly on the heels of credible intelligence to intercept terrorists who were on the verge of receiving a Two Million Naira ransom from relatives of their kidnapped victims. The gallant troops with superior firepower engaged and overwhelmed the criminal elements that eventually aborted the collection of the Two Million Naira ransom and abandoned the victims; including 2 women and 3 children. During the encounter, troops neutralized one terrorist, while others escaped with gunshot wounds. Troops recovered one AK-47 rifle and a motorcycle from the terrorists.

10. In another development, on same day, troops on aggressive fighting patrol in the general area of Zaye Ngusa in Borno State neutralized one terrorist as others fled with various degrees of gunshot wounds. Similarly, in well-coordinated ambush operations conducted by troops at Pulka – Sabon Gari – Kirawa road intercepted BHT criminal elements’ logistics convoy. The superior firepower of the gallant troops forced the criminals to abandon their consignment consisting 8 bicycles, several bags of grains, assorted packets of drugs and other food items.

11. Meanwhile, the Air Task Force of Operation LAFIYA DOLE has not relented in its efforts to rid the North East zone of BHT/ISWAP criminal elements. During the period in focus, the Air Task Force maintained the tempo in its role of dominating the airspace with appropriate Nigerian Air Force fighter jets and helicopter gunships. The Air Task Force conducted series of aerial surveillance missions and offensive air strikes on terrorists’ enclaves as well as provided appropriate air support to ground troops. On 22 November 2020, the Air Task Force knocked out an ISWAP logistics base and neutralized several of their fighters at Tumbun Rego in Borno State. This feat was achieved through air strikes executed on the heels of credible intelligence reports, indicating that the location, with its makeshift structures camouflaged under dense vegetation, was being used by the terrorists as a hub for their logistics items conveyed via the Lake and its tributaries for onward transportation using trucks and motorcycles.

12. The troops are hereby encouraged by Military High Command to build on the successes. The general public is equally assured of the determination of the High Command of the Armed Forces of Nigeria to stamp out the criminal elements from the North East zone.
NORTH-CENTRAL ZONE

13. In continuation of intensive kinetic operations against armed bandits and other criminals in the North Central zone, troops of Operations SAFE HAVEN and WHIRL STROKE conducted raids at identified criminals’ hideouts successfully. Notably on 19 November 2020, troops of Operation WHIRL STROKE raided a criminals’ hideout of armed militias at Tor Donga in Katsina – Ala Local Government Area of Benue State. During the raid, 3 bandits were neutralized with several others fatally injured. One locally made pistol was also recovered during the operation.

These meticulously executed raid operations resulted in the arrest of 36 suspects (including some suspected illegal miners) and the recovery of one locally fabricated pistol, 5 wooden saw blades, and a large amount of substances suspected to Cannabis Sativa, amongst other items.

15. Furthermore, on 23 November 2020, troops of Operation SAFE HAVEN, acting on a tip-off arrested a notorious bandit, one Mallam Usaini Mohammed who was recuperating at Mainasara clinic in Barkin Ladi Local Government Area of Plateau State. The suspect fled with gunshot wounds following an encounter with troops during a foiled armed robbery at Saminaka earlier in July 2020. A similar tip-off also led to the arrest of another group of 3 armed robbers at their hideout at Dogo village in Riyom Local Government Area of Plateau State on same day.

SOUTH-SOUTH ZONE
16. Troops of Operation DELTA SAFE have sustained the fight against economic sabotage in the zone successfully. Within the period in focus, Forward Operating Base IBAKA gunboats while on routine patrol around Ikang waterways, intercepted and arrested one medium size wooden boat laden with 30 drums of 300 litres of product suspected to be PMS with 2 suspects, two 40 HP outboard engines and 2 pumping machines. Items and suspects are currently in troop’s custody to be handed over to the relevant security agency.

17. Additionally, Nigerian Navy Ship SOROH in conjunction with SECTOR 2, Operation DELTA SAFE carried out a dawn operation on 21 November 2020 around Gbaran Community. In the course of the operation, 2 armed pirates, one with an AK 47 and the other with a pump action rifle were sighted as they tried engaging own personnel while escaping. However, one of the pirates was neutralized while the one with AK 47 sustained gunshot wounds and jumped into the river. A further search led to the discovery of 2 more locally made guns and cartridges in the apartment where the pirates reside.

18. Meanwhile, Operations CALM WATERS II and SWIFT RESPONSE have continued to record more successes. Within the period under review, about 774 bags of 50kg of foreign parboiled rice as well as 2 suspects were arrested and handed over to Nigerian Customs Service. A wooden boat laden with 11,375 litres of PMS was also intercepted.

19. Overall, the Military High Command encourages the troops and personnel of other security agencies to remain resolute and sustain the tempo in all the theatres of operation. The Military High Command also reassures the general public of its unwavering dedication to securing the country for all human activities to strive. Members of the general public are enjoined to continue providing timely information on the activities of criminals in their various localities to the nearest military and other security agencies location for prompt and effective action. Thank you.