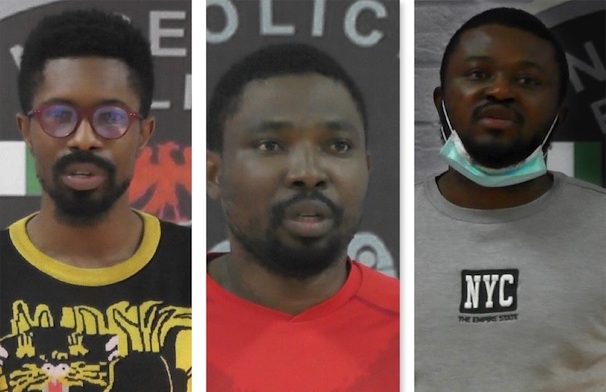 The Interpol has revealed that the three Nigerians busted last week for cyber crime belong to an organised global crime group, operating in 150 countries.

One of the suspects is Onwuka Emmanuel Chidiebere a.k.a Ceeceeboss TMT. The 32 year-old lives in Lekki, Lagos State. He is a native of Aro-Ikpa in Abia State.

The second suspect is Ikechukwu Ohanedozie a.k.a Dozzy. He is 34 years old.

According to Interpol, the Nigerians are believed to be members of a wider organized crime group, known as TMT, responsible for distributing malware, carrying out phishing campaigns and extensive Business Email Compromise scams.

Here is how Interpol describes their mode of operation:

“The suspects are alleged to have developed phishing links, domains, and mass mailing campaigns in which they impersonated representatives of organizations.

“They then used these campaigns to disseminate 26 malware programmes, spyware and remote access tools, including AgentTesla, Loki, Azorult, Spartan and the nanocore and Remcos Remote Access Trojans.

“These programmes were used to infiltrate and monitor the systems of victim organizations and individuals, before launching scams and syphoning funds.

According to the cyber security Group-IB, based in Singapore, the prolific gang is believed to have compromised government and private sector companies in more than 150 countries since 2017.

“Group-IB was also able to establish that the gang is divided into subgroups with a number of individuals still at large. While investigations are still ongoing, some 50,000 targeted victims have been identified so far.

“Group-IB’s participation in the operation came under Project Gateway, a framework which enables INTERPOL to cooperate with private partners and receive threat data directly.

Craig Jones, INTERPOL’s Cybercrime Director highlighted the outstanding cooperation between all those involved in the investigation and underlined the importance of public-private relationships in disrupting virtual crimes.

“This group was running a well-established criminal business model. From infiltration to cashing in, they used a multitude of tools and techniques to generate maximum profits. We look forward to seeing additional results from this operation,” he said.

When the suspects were picked last week, the Nigeria Police shared part of their findings on the gang’s modus operandi.

“Onuegwu Ifeanyi a.k.a SSGToolz specializes in creating, designing, selling of phishing links and hosting malwares on website used by the gang for phishing and hacking purposes.

“He collects charges running into several millions of naira from other fraudsters he mentors and improves their phishing capabilities.

“A comprehensive forensic analysis reveals that he had in his laptop-computer over 50,000 email accounts and websites including passwords of various individuals and corporate entities across the world.

“He recruited the third suspect Ikechukwu Ohanedozie a.k.a Dozzy, a medical student of Imo State University, into the gang. Ikechukwu Ohanedozie sorts and profiles e-mail accounts to determine financial strengths of prospective victims and passes on information obtained therefrom to Onwuka Emmanuel Chidiebere “.

The men are scheduled to be arraigned in Nigeria.