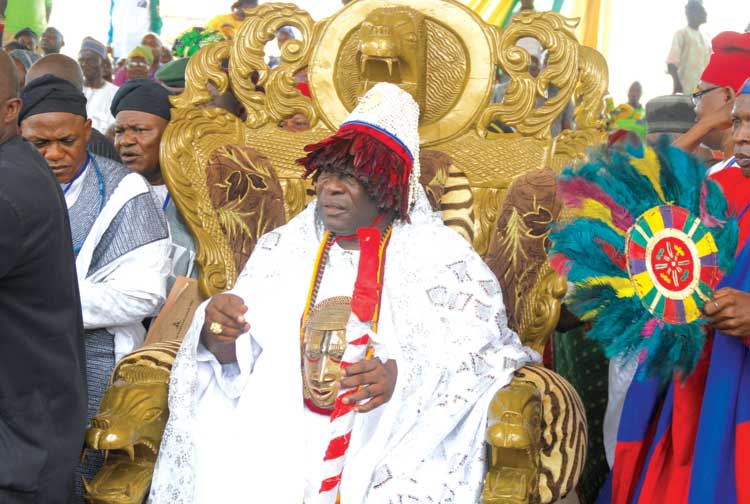 Three months after his passage, the race to succeed Dr Michael Ameh Oboni II, the late Attah of Igala kingdom may have become an open battle.

The 27th Attah Igala joined his ancestors on August 28th. The foremost Traditional Ruler of Igala kingdom and President Kogi Traditional Council of Chiefs passed on after a pile surgery at Nisa Hospital, a private medical facility in the nation’s capital.

Since his death, the kingdom has been in mourning. But, there have also been subterranean and sometimes deft moves by persons interested in how and who to step into the big shoes he left behind.

High-level discussions and underground lobbying have been going on in measured tones, among prominent sons and daughters of the kingdom. Recently, the voices have not only become audible, but almost rancorous.

All the voices are however in agreement that it is the turn of AjuAmeachor ruling house to climb the exalted throne. Brothers in the house have been set in battle regalia for the crown.

It was gathered that the field is full of many people of royal descent, including one academician based abroad who have signified interest in the throne. The frontline aspirants, however, are Princes Samuel Opaluwa, a former official of Central Bank of Nigeria, CBN; Matthew Alhaji Opaluwa, a Director with the Independent National Electoral Commission (INEC) and Ocholi Opaluwa a high ranking Customs Officer.

The selection process has factionalized the preferred ruling house. An attempt to streamline the interests last week ended in further cracks on the wall of the house and raised questions on its leadership.

On Thursday, a meeting of the house held in Idah, headquarters of the kingdom. The meeting which was convened by a factional head, Prince Jacob Yahaya Etu, a retired Deputy Commissioner of Police, screened, interviewed and considered the three main aspirants for the stool.

At the end of the meeting, Etu told stakeholders of the Clan that the family had unanimously agreed that Samuel Opaluwa being the eldest among the sons of Opaluwa Oguche be presented as the clan’s choice.

He said the family had so far consciously acted in full compliance with the Kogi State of Nigeria, Igala Area Traditional Council(Modification of Native Law and Custom) Order 2015 and traditional precedence which gives the exclusive right to nominate an Attah to the Ruling Family that is due to produce the Attah.

No sooner had he addressed the stakeholders than tongues started wagging about the propriety of his scheme. Some members of the clan described his efforts as a Kangaroo arrangement. Others said he is not their leader and accused him of acting in self-interest.

A statement by one Prince Peter Achimugu Oguche-Akpa aggregated the dissenting opinions. Achimugu who claimed to be the oldest member of the family and its Chairman even doubted Etu’s roots. Listen to him:

“To begin with, the traditional stool of the Attah is such that evokes respect and decorum to the extent that contenders should not be seen as exhibiting acts of desperation such as going to hire an individual from Lafiya in Nasarawa state to come and chair a Kangaroo factional meeting for the selection of the family designate especially when such a hired person’s patrilineal descent cannot be clearly traced to the Ajuamachor family.

“Further to this, is the fact that the eldest living member of the Ajumachor family is the only legally recognized person to summon a meeting of the entire family or selected elders of the family and preside over such for the selection of the family member to be presented to the kingmakers.

“The purported selection is not to the knowledge of myself and the Elders of the family and therefore is ultra vires. It must be noted that the Ajumachor ruling house is a peace-loving family and will not condone the manipulative actions of desperate contenders to the throne, who are only out to cause confusion and chaos.

“Any further actions, inactions from such desperate persons should be further disregarded as the only legally recognized person to preside over the nomination/selection of the family’s designate is my humble self.

Having broken my silence on this matter, I will henceforth from time to time pass on information on further developments on the family’s activities on this all-important matter.”

Igala people pride themselves as the ninth largest ethnic group in the country. The people almost exclusively populate Kogi East Senatorial zone, made up of 9 out of the 21 Local Government Areas in the State. There are also pockets of Igala people outside the kingdom.

Tradition and the law are clear on the selection process of the Attah Igala, whenever the stool is vacant. The throne is rotated among the four ruling houses of the kingdom.
They are AjuAku, AjuAmeachor, AjuAkogu and AjuOcholi.

The Kogi State Chieftaincy Law and the Igala Tradition envisages that the contest for the Attah stool be between aspirants from the ruling house whose turn it is to present a Candidate.

The ruling house is by law and tradition only entitled to nominate a single candidate who shall be presented to the other three Ruling Houses. The ruling houses will then jointly present the candidate to the
College of Kingmakers called the Igalamela and headed by the Etemahi, a First Class Traditional Ruler.

The Igalamela is obliged by law to endorse the choice of the due ruling house as submitted by all the four ruling houses and present him to the Achadu Oko Attah, the traditional Prime Minister of the Kingdom who will, in turn, submit his name to the Governor of the state and also commence the rites of coronation.

Yet, for the AjuAmeachor ruling house, it has been a long wait to ascend the throne. The last time somebody from the clan occupied the throne was in 1911 when Onuche Akpa became Attah. He reigned for about nine years leaving the throne in 1919. Since that time and due to some exegesis, his descendants have been unable to occupy the throne.

Will the century-old jinx be broken this time?