Ondo: A Nigerian State under siege 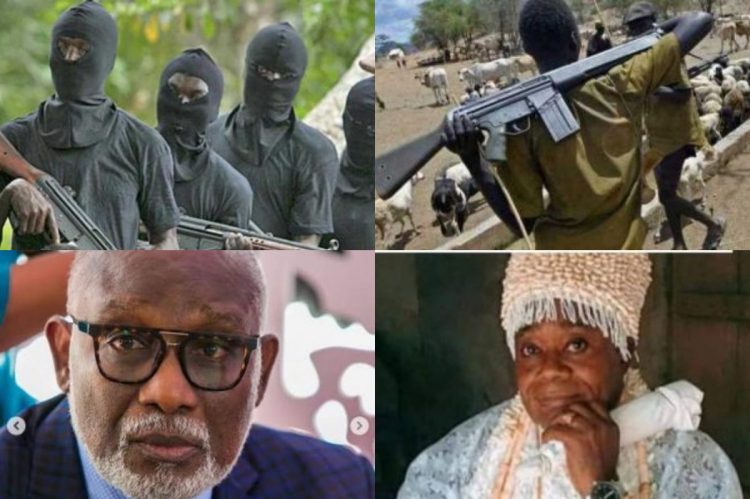 With events of the last few days, Ondo State, Southwest Nigeria is under serious siege. Kidnappers, herdsmen and robbers are scampering for the soul of the state. Residents are living in fear, traversing communities within the state is no longer safe.

This is because men of the dark world are having field day unchallenged. Kidnapping for ransom and killings have gone up, with poor policing system compounding the crisis in the State.

The terrain in Ondo, coupled with bad roads aids kidnapping. The moment motorists slowed down on approaching dilapidated roads, the kidnappers lurking around sprung out, pouncing on helpless preys, taking them deep in thick rain forest and then demand for ransom or kill their victims.

He was reportedly killed in Ose Local Government Area of Ondo State. The monarch was said to be returning from Akure in his official car around 4.00pm on Thursday when he was shot dead by the gunmen. It was gathered that the gunmen did not attack anyone else in the car or steal any item.

A relation of the traditional ruler said the monarch was in his official car which had his customised number plate. He was returning to his base when on getting to a rough road along Elegbeka, he was accosted by gunmen and shot.

The same day, at night, gunmen kidnapped the wife of Olugbenga Ale, Chief of Staff to Ondo State Governor, Rotimi Akeredolu was abducted by gunmen.

Ale’s wife was said to have been abducted on Thursday night, with her driver and one other person along Ondo-Akure Expressway at the Owen area of Idanre Local Government Area.

She was however, rescued two days after her kidnap by local security outfit, Amotekun and hunters.

Five days ago, former Presidential candidate of the Alliance for Democracy in 1999, Chief Olu Falae raised the alarm over invasion of his farm by Fulani herdsmen in Ondo State. He said Fulani herdsmen should not be allowed to kidnap him again for the second time as they did in September 2015.

Falae, in a letter addressed to the Commander of the state security outfit, Amotekun, Chief Adetunji Adeleye, said in the last few weeks, Fulani herdsmen came into his maize farm twice to eat up and trample large sessions of the farm. He said he reported the incidents to Alhaji Bello, Chairman Meiyetti Allah for Ondo State, but that nothing had happened.

Falae added that in the last few days, the Fulani herdsmen had gone to attack his citrus farm by stealing, harvesting oranges and destroying what they could not carry away. He said the police on security duty on the farm were sent to drive the herdsmen away, but that they had been coming back every night to attack his workers in the camp, breaking their door and carting away all their belongings.

Eyewitnesses said the nine-man gang invaded the bank at about 4:10pm and carted away an unspecified amount of money. They reportedly gained entrance into the bank after using dynamite to blow open the bullet-proof door.

These are some of the few cases of wanton insecurity in Ondo State. Herdsmen have been fingered carrying out most of the killing and maiming innocent lives. Farmers are now scared to go to their farms as they will be molested by rampaging herdsmen, who would harvest their crops and allow their herds to eat up the green leaves. They even kidnap the farms and demand for ransom. The government has not been able to secure the lives and properties of the people, as it is not in charge of the police.

The establishment by the local security outfit, Amotekun has not been doing much in a state where the police have failed.

In the midst of these insecurity, Governor Rotimi Akeredolu appears helpless. He has raised the alarm that Ondo is under siege and insecure, needing serious help to salvage the state from the hands of herdsmen, kidnappers and robbers. Reacting to the killing of Oba Adeusi, the governor said “all lives matter, but this is one too heavy and unbearable. It’s a sad day in Ondo State. Clearly, we are in a serious security crisis that requires extraordinary means.

“The security agencies, especially the Nigeria Police, have already been directed to fish out the perpetrators of this heinous crime. On our part as a government, we shall give whatever it takes to unravel this. These criminals who have brought this sad day on our state shall not go unpunished.

“In deference to our customs and traditions, the state government will advisedly refrain from making public reference in statements or utterances in respect of the identity of the great loss.

“Nonetheless, without prejudice to ongoing efforts towards getting to the roots of this abominable crime, government shall issue a formal and more detailed statement as dictated by tradition after due consultations with relevant stakeholders in the affected community.”

Afenifere, reacting to the development in Ondo State, especially the killing of the monarch said it is time for President Muhammadu Buhari to get up and secure Nigeria. Its spokesman, Yinka Odumakin, in a statement, said the shrinking of the governable and secured space in Nigeria shrank further with the brutal murder of Adeusi.

The Afenifere said this gruesome murder was coming as Afenifere was still smarting from the brutal murder of the daughter of Afenifere leader, Funke Olakunrin for which some Fulani herdsmen were currently on trial.

Afenifere stated that there had been other multiple murders across Yorubaland which the police had not been able to resolve and that it had reached a point that only very prominent killings get reported in this state of total insecurity in a failed state.

“The killing of any citizen worries us, how much more a first-class monarch. We ask the police to fish out the killers of Olufon as it is one murder too many and absolute failure and lack of competence by the security system in Nigeria to secure lives and property which is the first duty of any responsible government.

“We are fed up with the daily sucking of the blood of our people across Nigeria in the apparent festering of insecurity which now has a very conducive atmosphere in Nigeria,” it said.

Concern stakeholders are of the view that if urgent steps are not taking by the government and security agents to tackle insecurity in the state, herdsmen, kidnappers and robbers may overrun Ondo. They contend that Amotekun must be strengthened to combat these rising crimes.